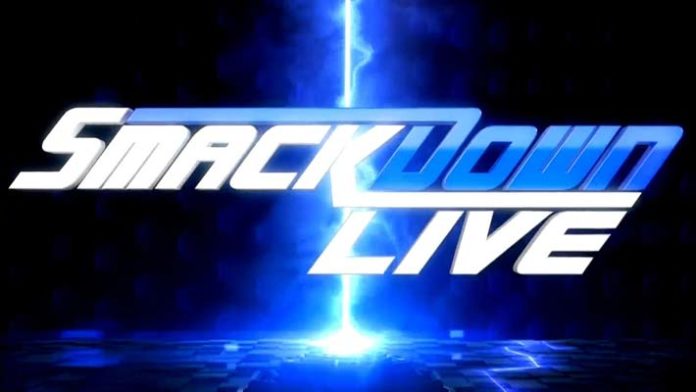 The April 3rd edition of WWE SmackDown was the go-home show for WrestleMania 34, and aired live from the Bridgestone Arena in Nashville, TN.

– SmackDown opens up with Daniel Bryan coming down to the ring. Bryan hits the ring and introduces his WrestleMania partner next, Shane McMahon. Shane comes down to the ring to join Daniel. Shane gets on the mic and first he congratulates Bryan on being medically cleared again to do what everyone loves watching him do. Shane adds that he’s had some medical issues himself, one of them thanks to Sami Zayn and Kevin Owens. Daniel Bryan speaks up and wants to apologize to Shane – because he was right all along about Kevin and Sami’s motives. Daniel says there’s only way to resolve things when partners have differences. Shane apologizes for being hot-headed. Daniel says the fans don’t want to see him and Shane shake hands, they want to see them hug it out. Shane says he’s not much of a hugger, but does it anyways. Shane says they’re on the same page now, and that’s bad news for Sami and Kevin. Shane says this is an opportunity for him and Daniel to rid SmackDown of Kevin and Sami, and after WrestleMania neither of them will ever be in a SmackDown arena again. Daniel asks the fans if they’re ready to see them beat the hell out of Owens and Zayn at WrestleMania, then he and Shane hug again. Charlotte’s music hits and Daniel and Shane head to the back.

– Charlotte vs. Natalya: This one is a non-Title match. Natalya takes control early on and tries to keep Charlotte grounded after a headlock take down. They run the ropes and Natalya goes to take out Charlotte’s leg but Charlotte no-sells it, then they collide in the middle of the ring. They fight into the corner, where Charlotte rolls up Natalya in a pin for a two count. Charlotte tries to keep Natalya grounded now with headlocks. Charlotte stomps on Natalya in the corner until senior official Charles Robinson pulls her off. Charlotte slams Natalya’s head against the mat and puts her in a head scissor hold. The fight spills out to ringside where Charlotte lays into Natalya with chops to the chest. Back in the ring, Charlotte drops Natalya then climbs to the top turnbuckle. Natalya gets up and throws Charlotte off the top, then goes for a surfboard submission. Charlotte fights out and drops Natalya with a kick to the face for a two count. Natalya goes for a sleeper, but Charlotte slams her back on the mat. Charlotte goes up top for a moonsault, but Natalya blocks it with her knees. Carmella’s music hits and she comes out with her Money In The Bank briefcase. Carmella gets in the ring with a second referee, and Charlotte kicks her briefcase away. Charlotte boots Carmella in the face and she rolls out of the ring. Natalya comes back in and rolls up Charlotte from behind for a two count. Charlotte comes back and drops Natalya and puts her in the Figure Four for the win.

– After the match, Asuka’s music hits and she dances down to the ring. Asuka gets in the ring and briefly exchanges words with Charlotte. They both look up at the WrestleMania sign, then Charlotte’s music hits and they leave.

– We see a pre-taped interview with WWE Champion AJ Styles backstage. AJ says Nakamura is reading him all wrong, and the reality of their WrestleMania dream match is that he’s going to beat Nakamura. Later tonight, AJ & Nakamura will team up against Chad Gable & Shelton Benjamin.

– We see footage from outside the arena at a country music bar in Nashville.

– The broadcast team introduces a video package looking at the history leading up to Shane McMahon & Daniel Bryan vs. Kevin Owens & Sami Zayn at WrestleMania

– Bobby Roode comes down to join the broadcast team to do commentary on the next match.

– Rusev vs. Jinder Mahal: Aiden English introduces Rusev and watches from ringside. Randy Orton is shown backstage watching on a monitor. Rusev takes control early on and sends Jinder outside for a breather. Back in the ring, Jinder gets back in the game and hits some knees to the face of Rusev. Jinder hits a neckbreaker on Rusev and follows up with a knee drop. Jinder continues the offense until Rusev dodges a shot and takes down Jinder. Sunil Singh gets on the apron to try to distract Rusev, but Rusev kicks him in the head to knock him off. Jinder tries to capitalize on the distrction, but Rusev shuts him down with a big boot for the three count.

– After the match, Randy Orton runs in and hits an RKO out of nowhere on Rusev. Aiden English immediately start stomping on Orton, then English goes up top. Roode gets up from the broadcast table and pushes English off the turnbuckle, then Orton hits an RKO on English. Roode and Orton come face to face in the ring, then look up at the WrestleMania sign as the fans chant “Rusev Day.”

– We see a pre-taped interview with Sinsuka Nakamura where he discusses his match with AJ on Sunday. Nakamura says the reason he’s here in America is to win the WWE Championship at WrestleMania.

– The New Day is backstage exchanging words with the Usos about their match on Sunday. They leave, and the Bludgeon Brothers come in and destroy the camera with one of their mallets.

– Baron Corbin, Dolph Ziggler, Mojo Rawley and Primo vs. Zack Ryder, Fandango, Tyler Breeze and Tye Dillinger: Mojo and Ryder start things off, and Ryder hits a missile dropkick for an early 2 count. Mojo rams Ryder into the turnbuckle, and the aprons start clearing into the ring as the referee tries to restore order. Mojo and Dillinger go at it now, and Tye drops him. Fandango comes in and knocks Corbin off the apron, then starts brawling with Primo. Ziggler runs in and interferes, but Ryder runs in and clotheslines him outside. Fandango throws Corbin outside next, then Ryder hits a Rough Ryder on Mojo. The ring starts clearing and it comes down to Fandango and Corbin. Fandango rolls up Corbin for a two count, then goes to attack Corbin but Corbin catches him and hits the End of Days for the three count.

– After the match, Corbin walks over to the Andre The Giant Battle Royal trophy at ringside and looks at it.

– We see a pre-taped promo by Chad Gable and Shelton Benjamin. They say they’re going to beat Styles & Nakamura so badly tonight that it’ll ruin their dream match at WrestleMania.

– The announcers promo WrestleMania on the WWE Network again. Kevin Owens and Sami Zayn come out from the crowd and climb up on top of the broadcast table. They start trashing Bryan and McMahon, and make some personal insults about Bryan’s wife and kid. Bryan and McMahon see this on a monitor backstage, and decide to do something about it. Shane and Bryan come out to the stage, and Owens and Zayn retreat into the crowd. Bryan gets on the mic and tells everyone to get a good look because this is the last time you’ll see Owens and Zayn on SmackDown. Shane leads the crowd in singing “goodbye” to Owens and Zayn.

– We see some more promotional videos for WrestleMania 34 on the WWE Network.

– Shelton Benjamin & Chad Gable vs. AJ Styles & Shinsuke Nakamura: The opening bell sounds for tonight’s main event, with Nakamura and Gable starting things off. Nakamura tags in AJ by patting him on the head. AJ and Nakamura exchange words, and Gable and Benjamin attack both of them while they’re distracted. Styles and Gable go at it now in the ring. Nakamura nad Benjamin tag in at the same time and Nakamura unloads with strikes. Gable tags in and joins Shelton to briefly double team Nakamura. Gable hits a moonsault off the top on Nakamura for a near-fall. Benjamin tags back in and continues working over Shinsuke. Benjamin looks for a running knee strike in the corner, but Nakamura dodges it and boots Shelton in the head. AJ and Gable tag in, and AJ clotheslines him down. AJ unloads with strikes on Gable, then hits a Pele kick on Shelton. Gable drops AJ from behind and rolls him up for a 2 count. AJ comes back with a neckbreaker, but then AJ gets distracted by Nakamura again. AJ stares down Nakamura, then hits the Phenomenal Forearm on Gable for the three count.

– After the match, AJ grabs his WWE Title belt at ringside, and talks trash to Nakamura from the floor. Benjamin attacks Nakamura from behind as AJ watches. Nakamura fights off Shelton, but AJ hits the ring too. AJ looks for a Phenomenal Forearm on Nakamura, but AJ stops before he hits him, like how Nakamura stopped last week before hitting AJ. AJ pats Nakamura on the head and they have a stare-down before AJ leaves. Nakamura looks on from the ring as AJ holds his WWE Title on the ramp and SmackDown goes off the air. WrestleMania 34 airs this Sunday.