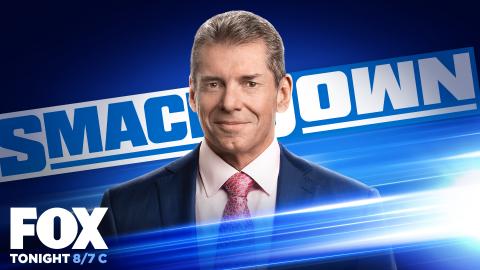 Happy Friday, Wrestling Edge. It is time to take a look at WWE’s offering for the go-home episode of Friday Night SmackDown prior to Summerslam.

Welcome to the Thunderdome.

The Fiend interrupts and gets his full entrance which is quite well presented in this format.  It feels like the sound is piped in as Fiend faces off with McMahon until Braun comes out to the ring.

Retribution interrupts surrounding the ring and as The Fiend teleports out of the ring the entire group attacks Braun. Though Braun is overwhelmed, both faces and heels come out to clear out Retribution. For some reason Miz is the last man out on his own..

There is an obvious juxtaposition of the piped noise with an inactive Thunderdome audience.

Battle of the Big Men

First match of the show is Big E vs Sheamus, though the locker room remains surrounding the ring. This is big beefy boys slapping beef, and possibly the build of the new faces of SmackDown.

Despite the action and balance, a fight outside the ring distracts Sheamus and allows Big E to win with a roll up.

Jeff Hardy is seen in the trainers room and turns out he was attacked, so he wants a knee brace for his Intercontinental Championship Match.  We also see Lucha House Party making their way to the ring for their Tag Title match against Shinsuke and Cesaro.

Kalisto sits the match our lt, allowing Lince Dorado and Gran Metalik to battle for the belts.  Great lucha things, though Miz and Morrison are backstage watching the battle and adding some comedic commentary.

Lucha House Party continues their survival with constant counters, though Cesaro gets the pin by following through a roll.

After the match it appears to be dissent among the luchadors.

It is also revealed that it was AJ Styles that attacked Jeff Hardy. Styles then cuts a strong promo against Hardy, though AJ did assist with Hardy’s issues.

Mandy Rose is interviewed backstage and wants to put the feud behind them and beg Sonya to be the person she once knew.

Sasha and Bayley come down to participate in an interview with Corey Graves about their upcoming defenses against Asuka.  Corey is implying that two are on the verge of splitting and though they deny it, Bayley tries to renege her offer to battle Asuka first at SummerSlam.

Naomi comes to the ring and offers to face both Bayley and Sasha, and Corey suggests turning it into a Beat The Clock challenge.

Sasha is first to battle Naomi, and Naomi looks great on action. Naomi has most of the match in control, but Sasha earns a time of 3:39 with a surprise Banks Statement.

Bayley comes in to immediately attempt to get the quick soon on a beaten Naomi. Naomi is resilient, using as much of the ring as possible and enduring constant offense. Naomi beats Bayley with 1:45 left on the clock and Bayley must defend first Sunday.

Asuka comes out and cuts an energetic p promo mostly in japanese before attacking both champs.

Sonya is stopped by Charly backstage and Sonya only wants to speak to the world. When Dana Brooke tries to show sympathy, Sonya delivers a stiff slap.

That slap tho' #SmackDown pic.twitter.com/r02a991C5g

Sonya immediately cuts off her music upon her entrance. She cuts an emotional promo against Mandy Rose, and raises the stakes to No DQ, and Loser Leaves WWE.

My guess is that with everything that happened this week, perhaps this is a great way to get Sonya off TV for some personal time.

Nikki Cross speaks about Alexa, trying to figure out what is different about her now. She says that she gets the feeling something terrible is going to happen.

We get a pre roll with Daniel Bryan criticizing AJ Styles and his time as champion.

AJ continues his attack on the knee of Hardy carrying over his advantage. He has an answer for all of Jeff’s offense and is able to redirect all attacks to the knee. Despite a focused strategy by Styles, Hardy picks up the win in a lengthy and fun triumph to once again become Intercontinental Champion.

Though Jeff is grateful for the win, AJ is quite upset about his loss.

What an abyssmal reaction by @AJStylesOrg to his loss on #SmackDown. pic.twitter.com/g9BcU27jwA

New Firefly Fun House sees Bray give us all his love, but tell us why that can be a horrible thing.  He also presents the tragedy of Braun and Alexa played by Huskus and Rambling Rabbit

We all remember what happened the last time someone stepped foot inside 'The Firefly Fun House'… pic.twitter.com/qroy8Z81CX

Braun breaks into the Firefly Fun House and the two carry the fight backstage, with Brain throwing Bray off the loading dock. There is an ambulance ready for the immobile Bray but once stretchered out, the ambulance stops and The Fiend appears to close the show.