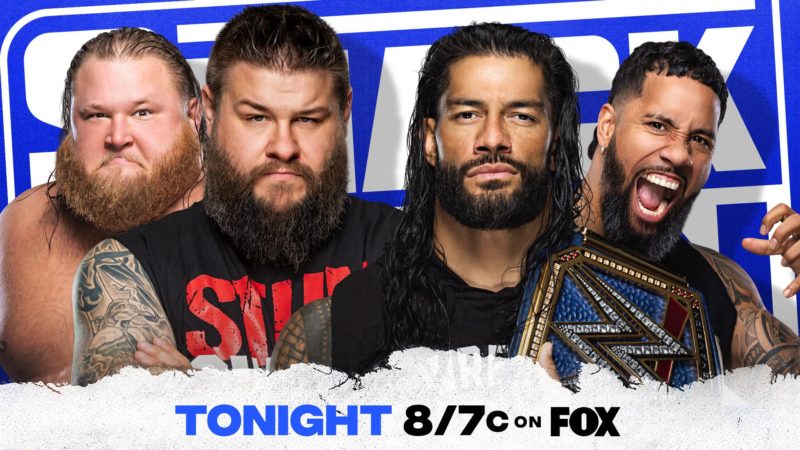 An Interview with Roman Reigns

After a 10-bell salute to Pat Patterson to open the show, Kayla Braxton introduces Roman Reigns. As Kayla points out Kevin’s transgressions as well as Roman’s apparent disdain for Jey. Roman is indignant about Kayla’s line of questioning and has Paul Heyman take over answering.

If you're gonna announce @WWERomanReigns you better do it right. Show them how it's done, @HeymanHustle #SmackDown pic.twitter.com/kzIjFCRWTB

As Paul begins answering Kevin Owens comes out to address Roman directly and propose a match at TLC. Roman blows off Owens, but when Owens calls him a B*tch Reigns continues his walk backstage while looking perturbed.

After the match Jey is backstage explaining himself to Roman having accepted Kevin’s challenge for disrespecting his family.

Bianca Belair is ringside and Bayley quickly goes outside to address her. This allows Natalya to throw Bayley into the steps and take over control of the match.

The match is quick as Natalya targets Bayley’s knee and gets her to tap out to a sharpshooter. After the match she engages in banter with Bianca ringside.

In tribute to Pat Patterson, they play a package highlighting his career set to the song My Way by Frank Sinatra. They also supercut Pat singing karaoke along with it and it is quite touching.

This match is a 6-man tag team match featuring former intercontinental champions as well as the current champion. The original Intercontinental Championship is ringside for this match and Big E is given new music and his original chalk entrance.

There is an incredible amount of action between the competitors as they find ways to feature each talent in this match, from Big E’s strength to Ziggler’s technical prowess to Sami’s heel shenanigans.

Neither side is particularly dominant as this match allows everybody to get their greatest hits in. Sami Zayn tries to utilize a blind tag to his advantage on Bryan, but is caught in a Labelle Lock that he escapes. Daniel Bryan is able to catch Sami with an inside cradle for the pin and win, giving the good guys the win for Pat. Afterward, the heels try to charge them but Dolph tries to beg for mercy before getting hit by all 3.

The #WWEThunderDome is going absolutely BANANA for this!

The Pat Patterson Tribute Match featuring six former Intercontinental Champions on #SmackDown has been a sight to behold!#ThankYouPat pic.twitter.com/zU0yjEnrQ3

Sasha and Carmella get quite catty as they face off and due to some shots at her pride, Sasha accepts the challenge for TLC by Carmella.

The Mysterios are ringside for Murphy, but King Corbin comes to the ring with a pair of hooded figures for Security. The hooded figures are clearly Blake and Cutler of the Forgotten Sons without Ryker. King Corbin keeps his eye on the Mysterios while the security keep them at bay as well. Corbin is dominant with his size and strength, though Murphy tries to out-wrestle him.

Outside the ring, the figures attack Dominick and Rey, but when Murphy goes to make the save Cutler and Blake run through the ring allowing Murphy to get caught with an End of Days by Corbin.

Looks like King @BaronCorbinWWE has brought some backup on #SmackDown tonight! pic.twitter.com/q9RwssIbMW

Jey comes out to the ring alone, fighting off both Kevin Owens and Otis while Roman weights til he’s ready to battle. When roman makes his way to the ring Jay seems to have renewed confidence but is hit with an Enzuigiri by Owens. Roman fakes out a tag and starts brutalizing Otis outside of the ring, throwing him into steps, the announce desk, and smashing him with the steps.

The match continues with Roman on the sidelines as Owens keeping his eyes on KO throughout the battle. Jey is ready to deliver the final blow to KO, but Roman Reigns stops him saying that he is the one that finishes the fight. When Jey goes to tag him in Owens feints and knocks Roman off the apron before stunning Jey. Roman runs in and delivers both a superman punch and guillotine getting disqualified in the process. Roman continues the attack afterward with a chair and also drags Jey to KO telling him to make him respect him.