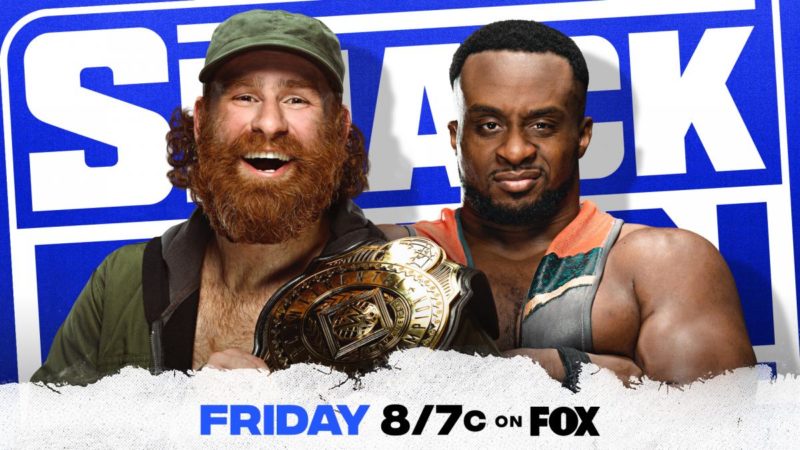 Welcome to Wrestling-Edge.com’s results for the Christmas edition of WWE SmackDown on Fox. This episode has three title matches on the card.

Owens and Reigns take part in this match to prevent interruption from Jey Uso. The two ferociously attack one-another, landing blows and using the cage efficiently. Owens does keep an eye on Heyman outside of the cage, but focuses on the champ.

Neither man appears to make an attempt to escape, preferring to exchange blows within the confines of the cage. Both men continuously endure the greatest offense fo their opponent. Roman eventually tries to walk out of the cage door, but Owens hangs on, using the door as a weapon to continue the beating on Roman. Owens is almost out of the ring, but Jey hits him with the door. After a short exchange Owens is cuffed to the cage by Jey Uso, allowing Roman to walk out and get the win.

There’s a talk-off between the women in the ring before it’s decided that the champs will face Bayley teaming with Carmella as well as Sasha teamed with Bianca.

What does EST of @WWE mean?@BiancaBelairWWE is here to teach you the ways. #Smackdown pic.twitter.com/4PRUV5xcRa

The match is under Triple Threat elimination rules, so only two women are in the ring at a time. IT gives each of the challenging teams a chance to face off against the champs. Extended exchange showing off Bianca vs Charlotte teasing future possibilities.

A lot of near-falls follow but it is Sasha that gets the first pin on Bayley to eliminate that team. Charlotte gets a figure four on Sasha, but Bianca throws her hair in so she can pull Sasha to the corner like a rope. Bianca uses her power to fight off Charlotte and nearly get the win with Charlotte. Bayley in the meantime takes out Sasha on the outside, leaving Bianca to fall to a Codebreaker/Natural Selection combination.

Jey Uso attacks Daniel Bryan  prior to the match, brutalizing him on the ramp and around the ring.

Daniel Bryan does everything he can to survive the onslaught by Jey. He seems to be focusing on making an impression on Roman with his aggression while Bryan just wants to survive. After a missed superkick by Jey Uso, Daniel Bryan is able to deliver a knee and get the win, once again shaming Jey to his cousin.

What a battle it was between Daniel Bryan and Jey Uso on #SmackDown pic.twitter.com/ILXHKNdPsc

This match is fought with lumberjacks ringside to prevent shenanigans by Sami Zayn or to take cheap shots on Big E. Sami’s strategy seems to be getting Big E in heel-heavy zones while Big E uses his strength and size to overpower Sami and fight off the other heels.

The lumberjacks dissolve into a brawl amongst each other once Big E spears Sami out of the ring. As they fight, Sami Zayn tries to escape only to be tackled by Apollo Crews and carried back to the ring. Big E is there to meet him with a Belly to Belly, a Big Splash, and the Big Ending for the pin and win to become the NEW Intercontinental Champion.

That's the perfect way to end the final #SmackDown of 2020. @WWEBigE is your NEW Intercontinental Champion! pic.twitter.com/tusbHCAOBN

The babyface lumberjacks come into the ring to celebrate with Big E, hoisting him into the air in triumph as rainbow confetti falls.