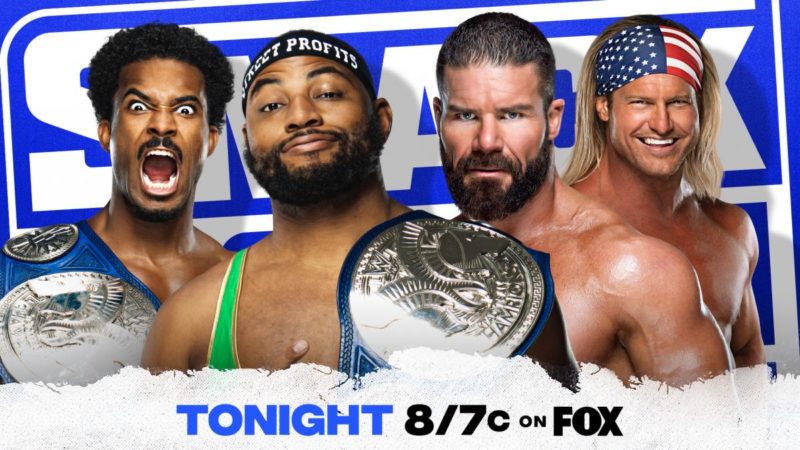 Welcome to Wrestling-Edge.com’s results for WWE Friday Night SmackDown airing January 08, 2021. Tonight the SmackDown Tag Team and Intercontinental Championships are on the line.

Roman enters the Thunderdome flanked by Paul Heyman and Jey Uso. He says that he likes and respects Kevin Owens, and appreciates his motivation. Roman soon calls out Adam Pearce who makes his way out and Roman forces him to watch a video package about the Cage Match.

They clearly point out that Pearce defied them by making the Jey/KO match, and demand he explain why he made the match which put KO out of commission. He berates Pearce for making a Gauntlet Match which is disrespectful for him being unable to choose an opponent. He continues to admonish Pearce for his lack of respect perceived. After a tense moment, Roman threateningly tells Pearce that maybe he is safe as he leaves the ring.

The match starts almost immediately with Crews using his athleticism vs the strength of Big E. Crews and E do both have the attribute of their opponent, making for an intense match. Crews hooks Big E’s legs after a suplex and it looks like he wins, but it may be a double pin. They go to commercial as E looks at the ref confused.

Big E gets to keep the title since it’s a draw, but Crews is indignant and demands an immediate challenge. He slaps E and infuriates E to the point he demands the match restarted.

The two increase the intensity, with Crews able to get some pinpoint offense in. The Strength and righteous anger of Big E isn’t enough for him to overcome as he hits the Big Ending for the win.

Sonya DeVille is back and seems to be taking a role as an official to assist Adam Pearce going over.

Ford’s leg may be compromised going into this match, and we see that Dawkins starts the match for the team. While he valiantly battles, he does tag Ford in who seems to injure himself diving onto Roode and Ziggler on the outside.

Roode and Ziggler gain the upper hand back in the ring, isolating Dawkins as they pick him apart. They appear to be quite dominant throughout the match, leading to multiple near falls. Dawkins and Roode get in a fight on the apron as Ford tries to tag him in, but Dawkins is knocked off by Ziggler. Ziggler eventually triumphs and makes the pin on Ford, becoming the NEW WWE SmackDown Tag Team Champions.

The Dirty Dawgs did it!

Prior to the match, Paul Heyman approaches Adam Pearce and lets him know that “Scrap Iron” is making his return. He has pulled strings and put Adam Pearce in the match.

Rey Mysterio and Sami Zayn start the match, and Sami cuts a long promo about the conspiracy against him, and brings his own documentary crew with him. Rey Defeats him quickly with a 619 leading to Shinsuke Nakamura entering next.

Rey and Nakamura have an amazing match, both being crisp and athletic. It does fall apart later between the two, with a botches 619 transition. When Rey goes to perform a Frog Splash, Nakamura gets his knees up and taps Rey with an armbar for the win.

An incredible counter by @ShinsukeN leads to eliminating @reymysterio from the Gauntlet Match by submission! #SmackDown pic.twitter.com/qJ0Ys9nMlm

As soon as this occurs King Corbin comes to the ring and throws Dominik into the stairs before attacking Rey. The match between Shinsuke and King Corban is given a good chunk of time, but a Kinshasa puts away King Corbin and opens the door for Daniel Bryan.

There is an incredible level of technicality between these two, leading to an enthralling balanced match. The battle between the two is only stopped by a Kinshasa, which allows Shinsuke to pin Bryan, but the two shake hands in a show of respect afterward.

Jey, Roman, and Heyman accompany Adam Pearce to the ring, but Jey and Roman get in the ring before the match begins and attack Shinsuke. They leave him down with a Superkick, Superman Punch, and Splash before Roman demands Adam get in the ring. He throws Pearce in the ring and Jey delivers a Superkick. Roman demands the bell be rung and Jey drags Pearce on top of Shinsuke, forcing the ref to make the three count. Pearce wins the match and faces Roman at the Rumble.