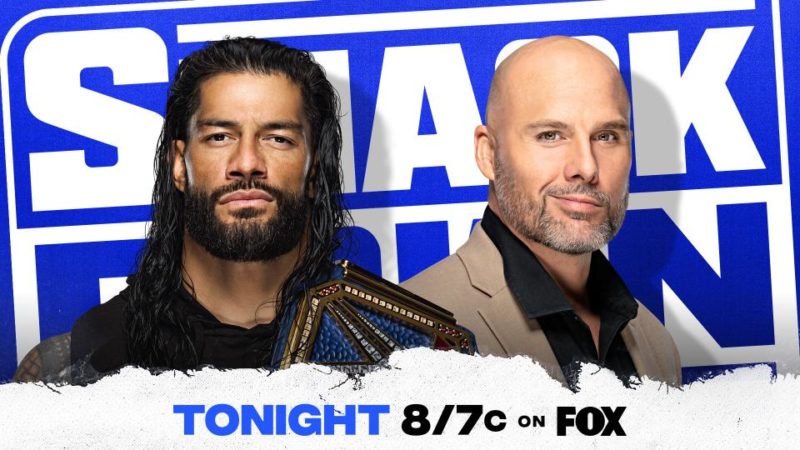 Paul Heyman opens the show in back with Roman Reigns as they go over the contract for Royal Rumble. Roman seems to be unsatisfied so Paul takes the contract so he can get a stipulation added.

"@WWERomanReigns vs. @ScrapDaddyAP needs a stipulation that gives you the freedom to be you. To teach Adam Pearce about fear and respect." – @HeymanHustle #SmackDown pic.twitter.com/6RgR56vEsK

Jey comes out talking about how his family is the one calling the shots. He also tells everybody they should be thanking Roman and he’ll go win the Royal Rumble to take the WWE Championship. He also challenges Shinsuke to come down and see how tough he really is. Shinsuke comes down accompanied by his old theme and simply delivers a kick before the two face off.

Jey recovers before their match, but Nakamura is back to his old strong style form. His aggression is hitting hard and he’s in control when Cesaro’s music plays and he comes down to ringside.

Cesaro jumps on commentary and declares his desire to enter the Royal Rumble. He’s also out to support Shinsuke, who is now matched in battle by Uso. Shinsuke eats a superkick but gets the knees up on the splash. Uso tries to use the ropes for leverage on the pin, but the ref waves it off. Shinsuke wins with a Kinshasa, celebrating with Cesaro in ring.

Adam Pearce is going over his situation with Sonya Deville backstage when Paul comes up with the contract from Reigns. Turns out he’s asked for a No Disqualification match, which Pearce then accepts.

Paul brings back the contract to Roman, but Roman doesn’t want No DQ, he says he wants a Last Man Standing. He seems to be mentoring Apollo Crews who is sitting in the room soaking it in as Roman gives commands.

"He's gonna go for it because you're gonna make him."@WWERomanReigns wants a Last Man Standing Match with @ScrapDaddyAP at #RoyalRumble! @HeymanHustle pic.twitter.com/aJMk2x235u

Billie jumps on commentary and is dressed more Punk Rock. Liv and Natalya have some great grapples going on between them, staying connected through action. Liv almost gets the win with a small package, but Natalya kicks out. The two have prolonged conflict and when Natalya almost wins Billie gets up to tell off the ref. Billie runs through the ring and is too much of a distraction which allows Natalya to get the pin.

Dominic is on commentary while his father is in the match. King Corbin jaw-jacks with Dominic while attacking Rey. Corbin is clearly dominating Rey, and Dominic has enough and tries to interfere. King Corbin is able to use Rey as a weapon against Dominic and get the win with an End of Days.

Bayley comes out on a super 90s looking set and dressed in quite a loud outfit despite it being black and white.

Bayley congratulates Bianca Belair on her upcoming WWE Chronicle coming out on the network, but plays the clip of her beating Bianca. As she continues to Prod Bianca over her loss, she challenges Bianca to an Obstacle Course next week. Bianca accepts the challenge.

The two are matched in technique but Cesaro has the clear power advantage. There are some brilliant exchanges including Daniel Bryan delivering a Monkey Flip into the ropes. The battle continues to intensify between the two, with Bryan even kicking out of a spinning vertical superplex.

Cesaro eventually gets the win with a European Uppercut followed by a Neutralizer.

Big E is ringside on a couch doing commentary.

After the match, Apollo gets the title, looks at it, and tosses the belt back to Big E. It’s announced that next week they’ll battle for the Intercontinental Championship.

Adam Pearce comes to the ring without fanfare, and sits down at the table to sign the contract. After he does, Roman does as well. While Pearce walks back up the ramp his knee seems to act up. He reiterates that all contracts for WWE matches are the same, and since he knows that card is subject to change he will find a suitable replacement. He reveals Kevin Owens will be the opponent at the Rumble.