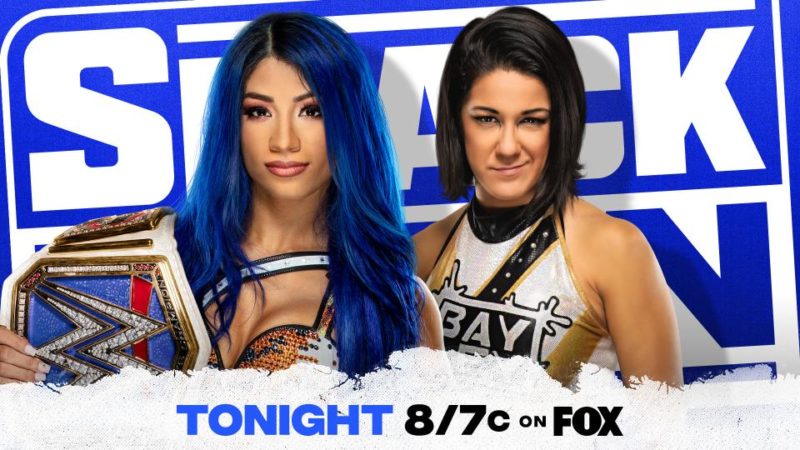 The show starts off with the big title match, with Bayley stating before the match that she is confident in her ability to win. The match is a technical exhibition for both women with some impressive maneuvering on the side of Banks and intensity from Bayely.

What a way to start the show!@SashaBanksWWE and @itsBayleyWWE’s bitter rivalry comes to a high-stakes close in this #SmackDown Women’s Title Match! pic.twitter.com/HjbtEV5pex

Sasha and Bayley get quite a bit of time for this match, going over multiple breaks as they battle. Bayley survives a Frog Splash as well as being bale to roll out of a pair of Bank Statement atttempts. Sasha also kicks out of a Bayley to Belly, and when Bayley tries to use both a kendo stick and chair she dodges. An Elbow from Bayley isn’t enough but she increases her intensity to punish Banks. After making Bayley run into the ringpost, Sasha is able to lock in a Banks Statement to successfully defend her SmackDown Women’s Championship.

As Banks is walking up the ramp Carmella appears out of nowhere and superkicks her, standing triumphant.

Kayla is backstage with Jey, who is victim to shade from not only Kevin Owens, but Kayla herself. When Paul Heyman shows up to criticize Jey for not having the interview approved by Roman, Kayla says that Paul has a better position in the family than he does.

Jey is clearly confused by why he has to ask Roman permission for interviews. When Roman sends Jey away he’s upset with Heyman for not dealing with the Jey situation himself, and demands to talk to Adam Pearce to end the KO problem.

Prior to the match Rey Mysterio is trying to get in contact with Aalyah, but it turns out his match is next. When he sends Dominick for his gear he is attacked by King Corbin.

This match is for a spot on the Survivor Series team, and Rey is still reeling from the attack by Corbin. Rey is able to hold his own against Corbin, but Seth Rollins makes his way to the ring and continues to maintain a presence on the stage.

Corbin’s strategy focuses on using his size and strength advantage over Rey while Rey gets attacks in when he can. As Rey sends Corbin to the outside, Corbin attacks Dominick angering Rey. Mysterio manages to hit a 619 on Corbin, but Seth begins attacking Dominik. While Rey goes out to defend his son, Murphy and Aalyah come out from the back and this upsets Rey who is hit with a Deep Six upon entering the ring and is pinned. King Corbin is headed to the Survivor Series team to represent SmackDown.

These three women are battling for a position in the Survivor Series team. The match is short and does see action from all three women, but when Natalya gets Zelina in a Sharpshooter Ruby plants a crossface and steals the win by submission.

Street Profits are backstage trying to get information on The New Day from Big E, but when he refuses to give it, Billie Kay offers her services instead.

This is another match to get on the Survivor Series’ team. The Mysterios are shown watching backstage as well at a poor angle.

As Otis and Seth begin to battle, Murphy makes his way out to the ring as well. The distraction by the presence of Murphy allows Otis to get some openings, but when Otis believes that Murphy may interfere Rollins is able to land a superkick and stomp for the win to advance. As Seth looks on in shock, backstage the Mysterios seem to continue their distrust of Murphy.

Seth chases down Murphy backstage to confirm that they’re back on the same page. Murphy declares Seth Messiah and himself Disciple. As Seth runs off Aalyah comes up upset with him, though Murphy says to trust him, and it’s for the Greater Good.

There’s an interview with Lars Sullivan where he talks about how he was bullied before, but put on muscle to become the bully. Also, he screams.

This is a match made due to the disrespect shown to Jey in his current situation. Owens and Uso fight all around the ring, and we see that Roman Reigns is watching the match backstage. As the battle continues Paul Heyman comes down to the ring to observe.

The fight continues with Uso revitalized and able to worm out of all of Kevin’s offense. KO is ready to set Jey up for a Stunner but Roman’s music hits which allows Jey to hit KO with a low blow headbutt and land a splash for the win. He celebrates with Roman on the ramp as the show goes off the air.