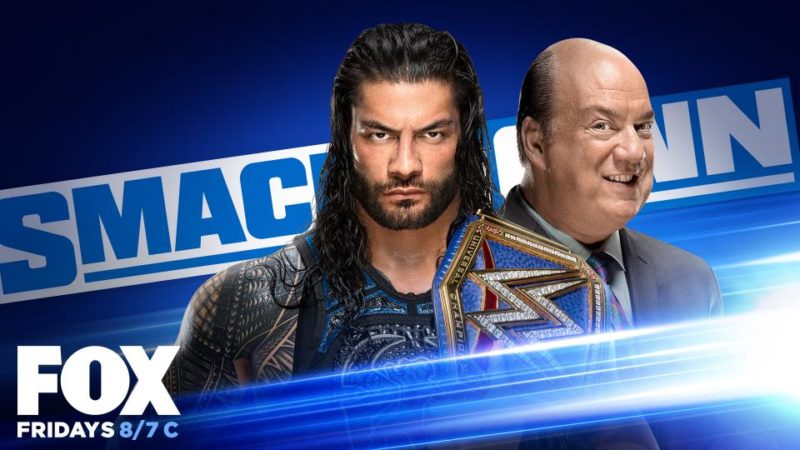 Welcome to the WWE Smackdown results on Wrestling-Edge.com for October 02, 2020. Tonight we see Roman Reigns coronated as Tribal Chief and will have Alexa Bliss on “The KO Show.”

The show starts out with Roman Reigns and Paul Heyman, so we’ll get the coronation first. Paul Heyman gives a reverent promo but Roman interrupts by grabbing the microphone. Roman is perturbed because Jey himself didn’t acknowledge Roman as Tribal Chief. Roman calls out Jey who comes down to the ring.

Jey says that he doesn’t know Roman and though he may have been beaten down his spirit would never be broken. Jey claims that without Jimmy throwing in the towel that championship would have been his. Roman calls Clash of Champions the worst night personally and professionally of his life. All that Jey had to do was acknowledge Roman and he wouldn’t have had to protect the honor of the family.

"You think I'm proud of what I did? Clash of Champions was the worst night of my career." – @WWERomanReigns to Jey @WWEUsos #SmackDown pic.twitter.com/JLYDUy7Iq5

Roman says that  Jey won’t even look him in the eye and keeps eyeing the championship. Since it’s that important to him he’ll give him another shot at Hell in a Cell, but this will have higher stakes than any match in WWE history. As Roman leaves Jey accepts the offer whatever the stakes are.

After Roman leaves AJ Styles comes out and addresses Jey saying that the opportunity should go to somebody more deserving. Jey launches onto styles and they start a match.

Thanks for coming, @AJStylesOrg! #SmackDown pic.twitter.com/bUbPIpYU0z

Styles starts jaw-jacking immediately in the match, but Jey is fierce with his attack. Styles recovers and stalls Jey’s momentum by stopping his dive and suplexing him from the ring to the announce table.

Following the events that unfolded at #WWEClash, @AJStylesOrg and Jey @WWEUsos look to bounce back strong as they collide in one-on-one action. #SmackDown pic.twitter.com/b40IkjkCh3

There is a ton of action in this match, Jey able to fly everywhere around the ring and Styles able to counter the offense of Uso. Jey gets the knees up to prevent a splash and when Styles goes for a phenomenal forearm Jey Uso uses a trio of superkicks to put AJ down and complete a splash for the win.

Sami Zayn cuts a promo about his grievances with being ignored as Champion and now that he has claimed his rightful title he trashes the former title.

Beforehand Otis claims that he will represent himself in court for the custody of the Money in the Bank briefcase next week. The match is very short with Otis dominating John Morrison for the win.

Before the match Big E sent in a video challenging Sheamus to a Street Fight. The Match is a short squash which is swiftly ended with two Brogue Kicks to Shorty G.

Someone hide Larry the parking guy. @WWEBigE has challenged @WWESheamus to a 'Falls Count Anywhere' match for next week's #SmackDown! pic.twitter.com/dxE279PdCK

The KO Show with Alexa Bliss

KO is apparently trying to find out what is happening with Alexa Bliss because if he knows what happened to her he may know what happened to Aleister Black. Alexa starts describing the feeling of being around The Fiend and it seems frightfully entrancing. Owens can clearly see that he’s not going to get any answers while Alexa tells him that He’s here now and to “let him in.” The lights go out and suddenly the fiend appears delivering the Mandible Claw as Alexa sits  looking on.

After Owens passes out, The Fiend offers his hand to Alexa who takes it and smiles before we cut to commercial.

Before the match Lince talks trash about Kalisto being big-headed and still in the locker room. After the match begins, Kalisto comes out upset with Lucha House Party for apparently forgetting about him.

The match is sort of two rematches in one with Lucha House Party focusing on Shinsuke and Cesaro while Riddle focuses on Corbin. Kalisto tries to lend a helping hand with a kick to Cesaro at the ropes, but Cesaro reverses the grapple and Kalisto kicks Lince Dorado instead. However Matt Riddle carries the match to victory with a Bro Derek on Cesaro.

After the match Kalisto goes in the ring and celebrates with Matt Riddle, but Lince starts getting in a fight with him while Metalik and Riddle break them up.

Carmella reveals herself as the mystery woman who has been in the promos the past few weeks. Says whether drafted to Raw or SmackDown she will be untouchable.

Sasha declares that she will still be coming for the SmackDown women’s championship and now that Bayley isn’t using her to retain the title, she’s coming for it. Also reveals that her neck is no longer injured by removing her collar.

"You don't stand a chance."

Sami apparently has taped ribs and Jeff hardy takes advantage of that after Zayn has a hot start. Zayn tries to cheat with an exposed turnbuckle, but Hardy avoids it and the attacks continue to the outside.

Both Jeff and Sami seem to be reeling from damage during both this match and their ladder match. No man has a clear advantage and there’s even a full double-down following a superplex. The two battle in the exposed corner, both avoiding it until Sami Zayn manages to sweep the leg to make Hardy land face-first on the turnbuckle for the win.