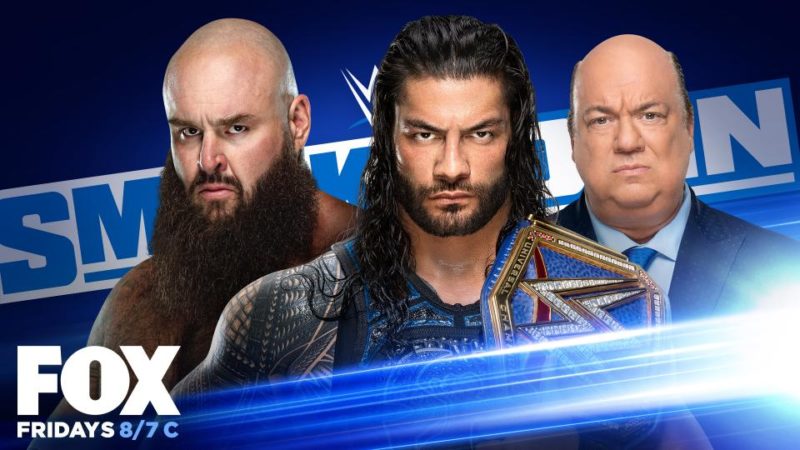 Happy Friday and welcome to the results for SmackDown’s 2020 Season Premiere. This episode is headlined by a clash between Braun Strowman and Roman Reigns for the WWE Universal Championship.

The show starts with the roster onstage with Triple H and Stephanie McMahon in the ring. They give a rundown of the card for tonight as well as introducing some new talent for tonight. During the introduction of Street Profits they’re attacked by Robert Roode and Dolph Ziggler. This devolves into a brawl by the entire roster which is interrupted by an appearance by Lars Sullivan.

Sullivan makes quick work of quite a few babyfaces but Jeff Hardy gets involved and clears Lars from the ring.

The match starts with some agility from Jeff, but when he lands on his injured knee it slows him down. Lars Sullivan takes advantage of this to show off his power over Hardy.  Jeff is able to find an opening to deliver a Whisper in the Wind, but Sullivan kicks out at one. Hardy hits a Twist of Fate but Sullivan once again pops up at one and grabs Hardy off the top rope to deliver a Freak Accident for the win.

The New Day vs Sheamus/Cesaro/Shinesuke Nakamura

The New Day get time in the ring first to talk about their time together over the past six years. The moments they’ve had together earning championships as well as Kofi’s championship win. All three get very emotional as they confide that they saved each other’s careers. There’s also a sweet Hamilton reference with them teaming up “One Last Time”

This is the first time in a year that The New Day has been able to tag as a trio due to injuries. This match also has some signifigance as for now it’s a brief reunion of “The Bar” who have been a major part of the New Day’s recent history. Cool spot as Woods picks up Big E with an Electric Chair so he can splash. The New Day continues to take every opportunity they can to get in tandem offense, though the heels also manage to isolate Kofi for as ling as they can.

The New Day get a dramatic emotional win pinning Sheamus with a Big Ending DDT Combo allowing Big E to be the one that makes the pin.

Otis is backstage being interviewed by Kayla about his new solo status but instead Sami Zayne interrupts to mention how much he’s lost recently with Tucker and Mandy moving to Raw, and deduces that he’ll lose his case with The Miz as well. Otis doesn’t appreciate this and shoves him to the ground.

They show that Brie and Birdie are also in the ThunderDome watching along. He talks about people he’s interested in wrestling now that he’s back on SmackDown. As he runs down the names Seth Rollins comes down to welcome back Daniel Bryan and offer him a place beside him ruling the new era of SmackDown. As Daniel Bryan rejects the offer Seth Rollins attacks him and Bryan is able to run him off with some Yes Kicks.

Seth tries to escape up the ramp, Rey and Dominik Mysterio chase him back into the ring. Seth tries to get Daniel Bryan to team up with him Bryan leaves and Murphy instead comes out. Though it initially looks like Murphy is going to side with Rollins, Murphy instead tackles Seth running him off. Murphy offers his hand in friendship to Dominik and Rey, but they decline it and walk out the ring.

They show Ric Flair in the audience watching this match. Robert Roode does a good job keeping Dawkins out of the fight and knocks Ford off the side as well. The match is short as Dolph and Roode both get in the ring and beat down Dawkins for longer than the 5 seconds allowed, getting disqualified. After the match is ended, the challengers take out Dawkins but are removed themselves by a crossbody from Ford.

WWE Official Adam Pearce is overseeing the signing. Bayley and Sasha banter with Bayley claiming Sasha is Jealous and Sasha declares that it’s she that kept Bayley’s title safe. Somehow nobody goes through a table.

The tension between @itsBayleyWWE and @SashaBanksWWE is at an all-time high. #SmackDown pic.twitter.com/LLWP6TTtkn

We get shirtless Roman on free TV, so you’re welcome internet. Roman is dominating early in the match, manhandling Strowman around the ring. A Superman Punch gives Braun an opening to throw Roman over the commentary desk and then tackle him over the barricade.

We haven't seen @WWERomanReigns manhandled like this in a long time! #SmackDown pic.twitter.com/NmOFwSj5pV

They Show Goldberg in the ThunderDome watching along. Braun has maintained control of the match and gives Reigns a chokeslam, though when Roman kicks out of it he hits him in the crotch. Roman delivers a Spear, but Braun kicks out. Roman manages to catch a guillotine on Strowman and wins the match by putting Braun to sleep.

Jey Uso comes out to the ramp and stares down Roman who spears Braun again for emphasis before calling Jey to the ring. Jey starts walking and Roman grabs a chair telling Jey that he needs to be on top for the sake of the family and if he can destroy Braun imagine what he can do to Jey.

Roman continues beating Braun with a chair until the officials break it up. Roman continues to taunt and talk down Jey until Jey hits him with the chair. Roman answers with a superman punch mournfully declaring that his hand has been forced against him.

"YOU LOVE ME? I LOVE YOU TOO!" – Jey @WWEUSOs #SmackDown pic.twitter.com/2FdbtFiNeI