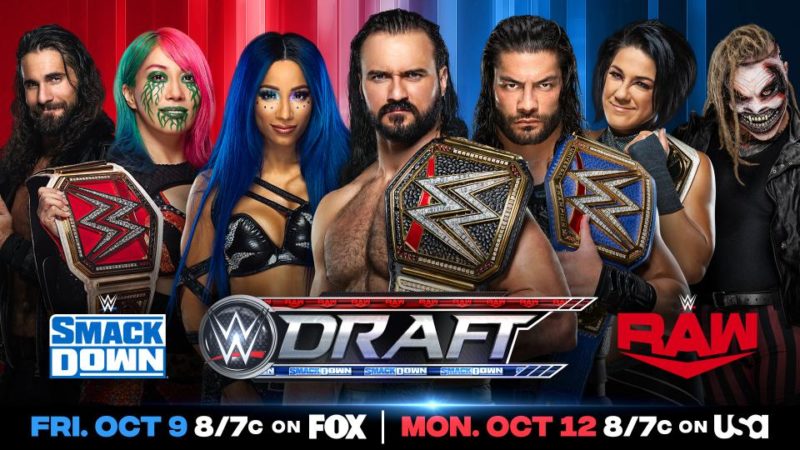 Welcome to Wrestling-Edge.com’s SmackDown results and coverage of night one of the WWE Draft. This night takes place on SmackDown which also features Big E facing Sheamus in a Falls Count Anywhere match.

Stephanie McMahon comes out to announce the first draft pick for the night which Raw wisely uses to keep Drew McIntyre. Smackdown also keeps Roman Reigns, so the top champions stay where they are. Raw also keeps The Raw Women’s Champion Asuka while Smackdown picks Seth Rollins making the first brand switch. Raw used their last pick of the first round to draft The Hurt Business.

Seth is interviewed afterward and seems to be glad to get the Mysterio drama behind him.

Starts out with some vulgar displays of power from Big E including a spear to the outside where it looks like he lands on his head. Sheamus recovers before Big E can use a Kendo Stick and takes over Big E gets his bearings back after using duct tape to bind Sheamus’s ankles and wielding the Kendo Stick on his own.

The match goes backstage and Sheamus weaponizes catering to coat Big E in eggs and flour. The beating goes back and forth between both competitors making use of their entire environment. They end up in the parking area and Big E gets slammed into a windshield before Sheamus uses the door and trunk as weapons. Big E wins the match by delivering a big ending off a car and through a table for the pin.

Big E is interviewed after the match and is is surprised by Kofi and Xavier Woods congratulating him. They declare their desire to once again be WWE Tag Team Champions and I guess are back officially.

The band is back together! #SmackDown pic.twitter.com/DCmu1svZdO

Jey Uso comes out to ask what stipulation Roman is going to add to their Hell in a Cell match. Heyman jumps onto the titantron to say that while he appreciates the ambition Roman will declare the stakes on his own time. He also manages to sinisterly introduce a video package of their previous match.

We get Roman talking about their upbringing and again regretfully addressing Jey. It seems that he’s going to have an I Quit match within Hell in a Cell and once Jay says I Quit there will be consequences.

The first pick is AJ Styles moving over to Raw while Smackdown retains Sasha banks. Naomi is moving to Monday Night Raw and Bianca Belair is named to Smackdown. Raw also keeps both members of the WWE Women’s Tag Team Championship Nia Jax and Shayna Baszler.

They give AJ a bit of time to respond from his Twitch studio.

Monday Night Raw is going to be… 𝑷𝒉𝒆𝒏𝒐𝒎𝒆𝒏𝒂𝒍! @AJStylesOrg bids farewell to #SmackDown after being drafted to #WWERaw. #WWEDraft pic.twitter.com/ra1yMEdElY

This was a match made via twitter interactions, but otherwise feels a bit random. The match is short and Matt Riddle wins with a Bro Derek on The Miz.

As they’re celebrating, Lars Sullivan returns and attacks both members of the winning team as well as The Miz.

Ricochet is Raw’s first draft pick this round while Jey remains on Smackdown. Mandy Rose stays on Mondays but the Mysterios move over to Smackdown. As Raw’s final pick they take the tag team of Miz and Morrison.

Afterward the Mysterios discuss their plans for Rollins since they’re on the same brand still.

After @itsBayleyWWE got herself disqualified, @SashaBanksWWE grabbed a chair and went swinging! #SmackDown pic.twitter.com/v2BWoo2Phq

Sasha later announces that she will face Bayley in Hell in a Cell so they can have a match with a definitive finish.

The Boss @Sasha BanksWWE has challenged @itsBayleyWWE to a 'Hell In a Cell Match' at #HIAC for the SmackDown Women's Championship! pic.twitter.com/7vKj5h8dWg

Xavier looks very good in his return, very athletic and holding his own against Cesaro. Kofi also looks incredible, seemingly changing his positioning mid-maneuver. Cesaro and Nakamura put up an incredible defense in an exciting match, but Woods hits a long-distance elbow drop to get the pin and become NEW Smackdown Tag Team Champions.

Following this news Kofi and Woods are drafted to Raw, but Big E is retained by SmackDown splitting The New Day.

The final round of the first night of the #WWEDraft broke all of our hearts. #SmackDown pic.twitter.com/HTt2TA7Ls3

Dana Brooke is drafted by Raw with Otis remaining on Smackdown. The final draft pick for tonight is Angel Garza for Raw.

Otis and Tucker are getting ready for court in the locker room, but they are served with a continuance so this story drags on just a little longer.

The Fiend vs Kevin Owens

Earlier in the night, Alexa Bliss approached Kevin Owens and told him to “Let him in.”

Apparently this is The Fiend’s first match on Smackdown which surprised me. Feind continues his dominance in matches, seemingly impervious to the attacks of Kevin Owens. Fiend takes Owens outside of the ring and continues his attacks with a Sister Abigail to the announce table. Owens is finally able to at least get the fiend down by giving him a DDT on the floor.  Owens keeps trying to get a count-out win but The Fiend gets up each time. Owens even gives a double Pop-Up Powerbomb to no effect. The Fiend plants a Mandible Claw, but Owens tries to use a Stunner which doesn’t work as The Fiend lands an Uranage for the win.

As teh show ends the lights go out and pop up to have Alexa Bliss Face to Face with the Fiend as we go out.