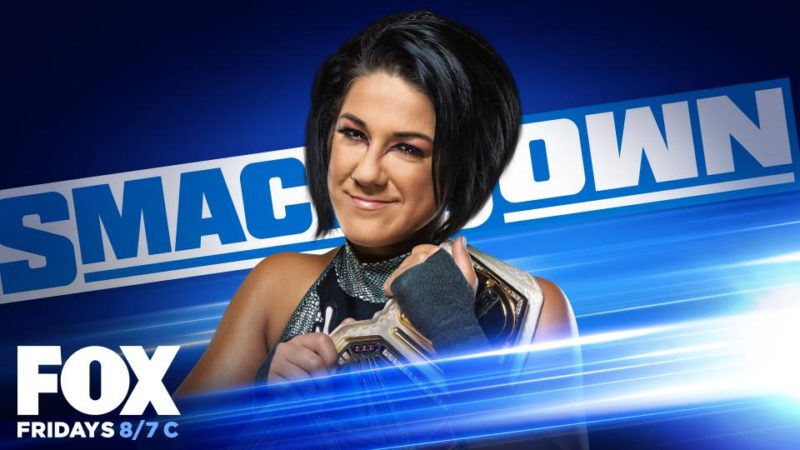 Happy Friday, Wrestling Edge. WWE SmackDown is live tonight and we are here with results and thoughts on the show. Tonight’s big feature: Bayley addresses her attack on Sasha Banks.

The show opens with Heyman speaking on behalf of Roman Reigns. He runs through their history of success in recent weeks, and brings out Jey Uso to have a face to face with Roman. Jey begins to thank Heyman for the opportunity, but he deflects and says that he merely got an order from Roman and executed it properly. Roman follows by expressing pride in his cousin, but regret that he will have to whip Jey’s ass.

"At Clash of Champions it's gonna be like when we were kids, I'm gonna whoop your ass." – @WWERomanReigns to Jey @WWEUsos #SmackDown pic.twitter.com/pSMbOkMdgj

King Corbin interrupts decrying the opportunity as nepotism and Sheamus comes out to agree. Jey sets them up for a match later tonight with Corbin and Sheamus taking on Jey and Roman.

Prior to the match, Sami Zayn is in the production truck calling shenanigans since he is still the proper Intercontinental Champion.

As the match begins, Sami Zayn comes out with his title complaining that they are fighting for a sham title. Adam Pearce comes out with security to eject Sami Zayn from the building, allowing AJ to hit a surprise attack before the bell, but Hardy quickly recovers and almost hits the Swanton for a swift victory, but it’s avoided and the match continues.

Sir, this is a @Wendys. #SmackDown pic.twitter.com/1NWKWSUTRa

The match continues afterward with a balanced offense between both Styles and Hardy, but it ends in a DQ after Sami Zayn attacks both Styles and Hardy, claiming he’s the only real champion. Jeff Hardy collapses onstage on his way up the ramp, unsure whether or not this is part of a story but AJ does discuss it with Kayla backstage, but Sami attacks Jeff while the next match begins.

Street Profits are backstage prior to the upcoming tag match enjoying the catering of the lounge, to the disgust of Shinsuke and Cesaro.

Gran Metalik and Kalisto are representing Lucha House Party in this match, with Linse Dorado on the outside. Cesaro and Shinsuke keep Kalisto in their corner, preventing him from tagging. Street Profits suddenly show up on the titantron showing a full party going on in the Champion’s Lounge. Shinsuke and Cesaro are distraught, but the distraction allows Kalisto to roll-up Cesaro to get the pin and win against the Tag Team champions.

Bayley comes out to the ring with the steel chair she used against Sasha Banks, and sits in it in the center of the ring before cuing a video package. After the video package, Bayley complains that nobody is asking how she’s doing or finding out how she feels. She claims that Banks was using her and she was simultaneously using Sasha Banks every step of the way.

Bayley exits the ramp as the next match begins, but runs back down to hit Nikki Cross with a steel chair.

Nikki Cross vs Lacey Evans vs Alexa Bliss vs Tamina

Alexa is checking on Nikki outside of the ring, as Lacey Evans comes to the ring. As the match moves forward, it does seem that Nikki Cross and Alexa are working well in tandem against the other women. However, Alexa suddenly seems aloof and delivers a Sister Abigail to Nikki Cross.

Alexa left the ring during commercial break, but Tamina and Lacey continue the action with Nikki selling on the outside. Nikki is eventually able to get back into the match, and there are a few somewhat sloppy false finishes until Cross finally pins Tamina for the win. Nikki Cross is challenging for the Smackdown Women’s Championship at Clash of Champions.

Another vignette airs for a mystery woman that I am hearing rumors is Carmella, but who really knows.

This is a continuation of the Lunchbox feud last week. Despite the amusing start of silliness, The Miz takes Otis’ lunchbox that held the contract last week.  While Morrison is celebrating Miz possessing the contract, Otis defeats Morrison and doesn’t seem to mind the lunchbox being stolen.

Turns out, they’ve been duped and the real lunchbox with the contract was in the briefcase.

Bray looks forward to debuting Persevering Parrot, but He loses control of Firefly FunHouse as The Boss comes in and instead introduces the new Special Advisor named Wobbly Walrus. This walrus is clearly a play on Paul Heyman.

Sheamus and King Corbin vs Jey Uso and Roman Reigns

Jey Uso starts the match fighting. Roman Reigns doesn’t come out to the match, leaving Jey in a 2-on-1 Handicap match situation. Jey keeps a valiant fight going, surviving both a White Noise and a Deep Six. As Sheamus gets ready to deliver a Brogue Kick Roman’s music hits, allowing Jey Uso to fire up and hit both Sheamus and King Corbin. As Jey goes to deliver a splash, Roman blind tags allowing him to hit the spear and pin Sheamus for the win depriving Jey of the thrill of victory.

After Jey @WWEUsos had to start off their tag team match solo, @WWERomanReigns arrives to even the odds with a timely assist. #SmackDown pic.twitter.com/MUZrhXwkKo