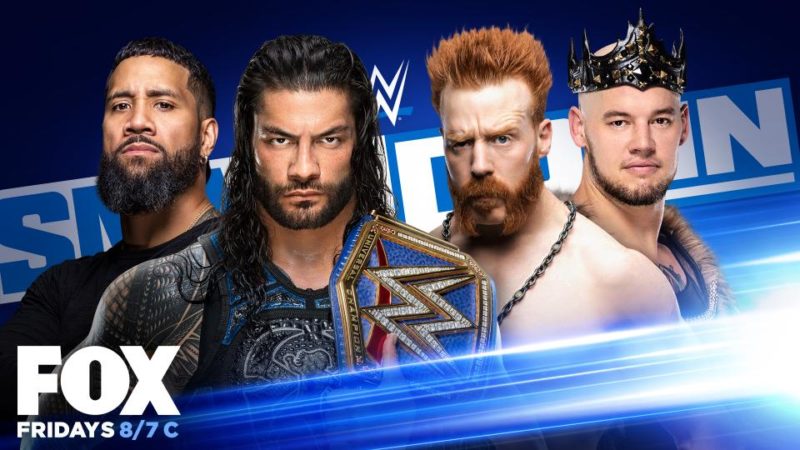 Tonight we start with Miz and Morrison on The Dirt Sheet discussing the recent move of Mandy Rose to Raw. While Miz claims that he did it for Otis’s own good, Otis comes out to tear down the set and demolish both. Tucker then appears with an assist to help keep Miz and Morrison in attack range. Miz is left stripped to his tightey whiteys while he and Morrison escape.

When the action returns Metalik is doing a good job holding his own against Cesaro. The athleticism of Metalik is on display but it isn’t enough to overcome the strength of Cesaro. Cesaro gets the win with the Neutralizer.

Matt Riddle gets a vignette where he demonstrates many different emotions that “Bro” can convey.

Alexa Bliss is interviewing her usual cohost about her opportunity to face Bayley despite being unable to beat her before. She is more confident this time at Clash of Champions because Sasha Banks won’t be there for her to have to keep an eye on as well. Nikki then begins to ask Alexa about hitting her using a Sister Abigail last week.

Lacey interrupts as Alexa answers and cuts down the two also talking about Nikki being too nice. I guess this means Lacey is a heel again as she leaves Nikki’s attack frustrated.

Alexa Bliss joins Michael Cole and Cory Graves on commentary. Lacey seems to maintain a higher amount of control through her heelish means. Cross is resilient but Lacey takes every opportunity to attack, even using hand sanitizer as a weapon rubbing it in her eyes. Nikki Cross is able to get the win with a neckbreaker.

As Lacey Evans crawls to the announce desk after the match, she taunts Alexa asking if she’s gong to get the Fiend. This awakens something in Alexa as she delivers a Sister Abigail to Lacey.

Sasha is at the performance center in a neck brace being interviewed by Michael Cole about Bayley’s statements last week. She is heartbroken over the loss of friendship especially with what they built together. She declares that since she is useless to Bayley, she’s going to take the one thing she loves with the SmackDown Women’s Championship. Bayley shows up out of nowhere to begin trying to beat Sasha down with a chair, but backstage staff breaks it up.

Sami is still indignant about not being referred to as the real intercontinental champion by the announcer. The match has heavy action, using all the landscape available from the ring inside and out.

It's great to see @SamiZayn back in action on #SmackDown! pic.twitter.com/L27YFYF3Zv

The match is quite balanced and AJ is able to endure a crisp Blue Thunder Bomb from Sami and tries to place a Calf Crusher that is rolled through. Sami nearly gets a pinfall by grasping the tights, but the ref sees and doesn’t count. While arguing, AJ rolls up Sami instead and appears to maybe have grabbed tights as well but still gets the win.

As Sami argues with Greg Hamilton, Hardy comes down and beats down both AJ and Sami with some assistance from a Ladder. Jeff gets a mic and says that at Clash of Champions he will take on both men in a Triple Threat Ladder Match.

Backstage Tucker and Otis are in the locker room when a mystery man comes up and delivers a manila envelope to Otis. He has been served with a mystery lawsuit.

Tucker reads the trumped up charges against Otis being made by Miz and Morrison, and they say they’ll avoid taking him to court if he surrenders Money in the Bank.

As Roman comes out, he and Heyman cut a promo emphasizing his role.

"This is my yard. This is my island. This is my ring. This is MY @WWE. If you want it. Come and TAKE IT from me." – @WWERomanReigns w/ @HeymanHustle #SmackDown pic.twitter.com/p2wLeCAGBY

The match is instant chaos. There are no count outs or disqualifications in this match, as well as no tags, meaning an endless brawl until pinfall or submission in the ring. Weaponry of all types is used and Jey picks up the win after hitting King Corbin with the Universal Championship and delviering a splash, stealing the pin from Roman’s Spear.

SPEAR THROUGH THE BARRICADE! #SmackDown pic.twitter.com/Y9uVcQNBle

Roman and Jey hug in the middle of the ring celebrating, but the joy quickly turns sour as Roman gets a look of pure rage on his face when Jey is leaving.