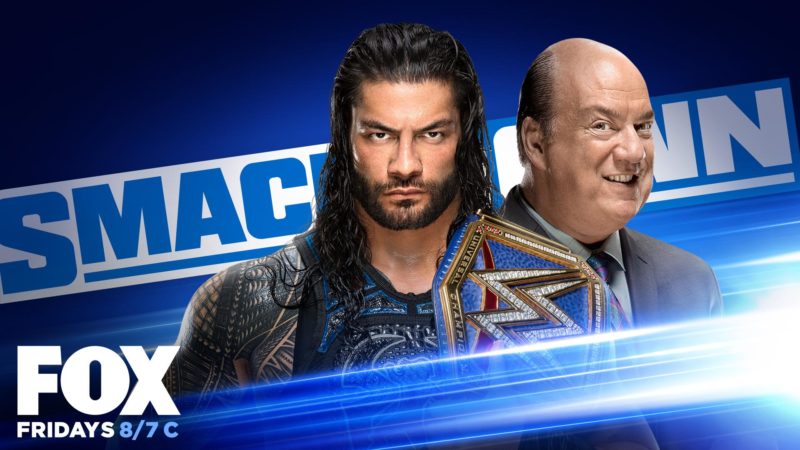 It is Friday night which means it is time for the results of WWE Friday Night Smackdown on Wrestling-Edge.

Clash before Clash of Champions

Corey Graves hosts an interview with Jeff Hardy, Sami Zayn, and AJ Styles over their ladder match Sunday. All three exchange words about their worthiness to hold the Intercontinental Championship before Jeff and AJ hand their titles over for the “ascension ceremony” where they lift the titles above the ring. As they begin to exit, Sami Zayn pushes a ladder onto both Jeff and AJ. After the surprise attack, Adam Pearce comes out and adds AJ to he and Jeff’s match tonight, happening next.

"That is the last time you will hold that Championship." – @AJStylesOrg to @JEFFHARDYBRAND #SmackDown pic.twitter.com/xnT0IUSuQ8

This is a preview for the championship occurring this weekend, though under triple threat rules instead of a ladder match. Sami Zayn initially avoids conflict letting AJ and Jeff attack each other while he remains on the outside. Sami does eventually get in once AJ and Jeff fight to the outside. Though AJ styles hits Jeff with the phenomenal forearm, Sami Zayn is able to get the pin.

HE STOLE IT!@SamiZayn stole the victory from @AJStylesOrg #SmackDown pic.twitter.com/mxyk0qktks

After the match, AJ attacks Jeff with a ladder and uses another to climb to the ladders in the middle of the ring.

Otis is being asked backstage about his lawsuit served last week, but Miz and Morrison try to goad Otis into incurring the wrath of their lawyers. Tucker, however, notices that only Miz’s name is on the contract which allows an opening for Otis to attack Miz and Morrison before Adam Pearce comes out to break it up.

Bayley breaks it down

Bayley comes out and cuts a promo on her opponent Nikki Cross next week.

Lince Dorado and Kalisto are once again both trying to play coach for Metalik. There is a lot of action between Shinsuke and Gran Metalik, as well as some very aggressive strikes. It’s Shinsuke that picks up the win and momentum going into Clash of Champions.

before Jey comes out to talk about the match, they have a promo video with the entire Anoa’i clans weighing in on the Roman vs Jey match. While Jey starts talking on the mic they show that Heyman and Roman are backstage watching the promo. Jey addresses Roman smiling to his face but giving a grimace behind his back. Paul Heyman replies via Titantron saying that the actual response will occur tonight, but on Roman’s time.

Initially there doesn’t seem to be anything really new in this matchup. It is a good showing of the versatility of Matt Riddle, with him able to endure and constantly adapt to Corbin’s offense though Corbin seems to have an answer for everything. Corbin gets the win lifting his knees to counter a Floaty Bro and hitting the End of Days for the win.

There is once again a video package for the mystery woman coming to SmackDown now with the word “Untouchable.”

Prior to the match Alexa has a video promo stating that Lacey is the kind of woman that gives women a bad name. Apparently that name is Karen.

Lacey seems to be dominant in the match, using her superior size against Alexa.  Alexa seems to get a slight opening, and is suddenly overcome with what appears to be disturbed feelings when The Fiend’s laugh fills the Thunderdome.

Is HE here? #SmackDown pic.twitter.com/skIreVkSFq

Lacey returns to dominance though Alexa does have occasional moments where she doesn’t seem to be fully in control. Bliss avoids the Lacey Evans Moonsault when The Fiend takes over the Thunderdome with lights and music for a moment. Bliss is suddenly on the offensive and aggressive against Lacey. Alexa refuses to call off the attack near the ropes so the ref disqualifies her. Alexa drags Lacey out of the ring and delivers a Sister Abigail before returning to the ring looking wild. Her walk off is also interrupted by Roman Reigns for some reason.

There's a name for that kind of lady but we can't put our finger on it. #SmackDown pic.twitter.com/asMRoUvQWe

Roman comes out and faces down Jey, and says that he doesn’t understand the true value of the championship. He blames it on Jey being a twin and never having to stand on his own. When Roman leaves the ring, Jey responds and speaks with absolute passion about the differences in their experience. The line that really hits me is Jey mentioning that people see Roman and praise him, while they ask Jey which one he is.

"Our family depends on ME. It's not you. It won't ever be you. It will always be me." – @WWERomanReigns w/ @HeymanHustle to Jey @WWEUsos #SmackDown pic.twitter.com/bkDRlgyXtX

Roman leaves and Jey is walking up the ramp when Roman hits him with a superman punch and reminds him who is feeding the family with the title.