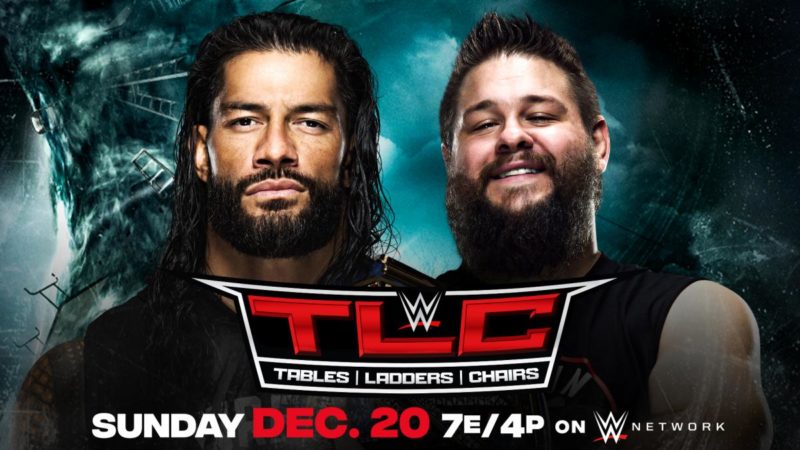 Welcome to Wrestling-Edge.com’s results for WWE TLC 2020 airing on the WWE Network. Prior to the show, we get a wonderful Firefly Carol from Bray Wyatt.

Styles starts out by going for the legs of McIntyre, but Drew quickly recovers and gets on the attack. Drew is the first to set up a table on the outside though Omos is a towering presence he’s watching. Drew is also first to set up and start climbing a ladder, but AJ cuts him off with a well placed chair.

Drew’s knee is clearly damaged, but he manages to suplex a Ladder onto AJ before AJ starts to use ladders and chairs to brutalize the left knee and leg of McIntyre. McIntyre eventually finds a way to use his strength while at a disadvantage, throwing AJ around, but eating a Phenomenal Forearm. When AJ tries to climb the ladder he ends up launched by Drew to the outside through a table.

Drew starts climbing but The Miz comes down and powerbombs Drew through a table before cashing in his Money in the Bank. Omos comes into the ring and throws Miz through the table on the outside. Morrison tries to attack Omos with a chair but it shatters, causing him to flee as Omos chases him out of the ring.

Styles and McIntyre battle on the top of the ladder, each getting incredibly close to getting the title. Miz joins the fray and all three men battle hard but eventually Drew throws AJ out of the ring before delivering a Claymore to Miz. This allows Drew to climb the ladder with one leg and get the belt, winning the TLC Match.

Seize the moment, and stay in it.

Carmella has a slight advantage with her Sommolier ringside, being caught when she’s in danger. Mella takes any opening she can to attack banks, using the apron to her advantage. Sasha uses her superior grappling prowess to put Carmella in multiple pin threats.

Carmella spikes Sasha with an inverted Edge-O-Matic, but Sasha kicks out of all 3 pins. Sasha is also knocked out on the apron, but when Mella goes to pin Sasha is able to grab the ropes. The two fight through pins, and Carmella locks in a Code of Silence and transitions into another submission which Sasha escapes.

The Sommelier rescues Carmella, but Sasha attacks him, allowing Carmella to continue attacks to the head of Banks. Sasha locks in a Banks Statement, which gives her the win by tapout.

New Day tries to end the battle early with a splash but Alexander is able to resist. Every competitor in this match is incredible in their athleticism, being a true exhibition of the potential of a tag division. There seems to be a bit of trouble in the water between Benjamin and Cedric, as Cedric gives himself a blind tag. Cedric hits the Lumbar Check on Kofi, pinning him to get the win and become NEW Raw Tag Team Champions.

Charlotte Flair is revealed as the mystery partner for Asuka, taking Lana’s place.

Asuka and Shayna start the match, and after her arm is under threat, Asuka tags in Charlotte who is explosive against Shayna, but Nia requests the tag in. Nia and Charlotte have a short exchange before we go back to Shayna and Asuka trading holds. Baszler tries to prevent another Charlotte tag, but Charlotte gets in and goes wild on both Baszler and Jax.

It’s revealed that Ric Flair is watching backstage. Charlotte is taken out via Samoan Drop, but Asuka went for a Blind Tag and gets the pin on Shayna. Asuka and Charlotte are the NEW WWE Women’s Tag Team Champions.

As the belt is raised to the rafters, Kevin Owens attacks Roman immediately. Owens takes Roman to the outside and leaves him lying, attacking him with the environment. Jey Uso tries to come out and attack Owens, but KO turns the tables on him and attacks him with a chair.

As Jey is escorted to the back, Roman revives and begins attacking KO with a ladder. Roman focuses on torturing KO, putting him through a pair of chairs before sending him out of the ring. Owens gets back in control and climbs the ladder, though as soon as Owens touches the title Jey Uso comes out and grabs Owens by the leg. This opening lets Roman deliver a Superman Punch to put down Owens.

Owens finds a way to fight off both Roman and Jey, and puts Jey through the announce table with a powerbomb before burying him with material. Owens quickly climbs the ladder and is stopped by Roman who grabs him by the shirt and brutalizes him in and out of the ring. After putting KO through a Table, Roman goes and uncovers Jey using the chair to attack KO before putting him through another table.

Roman makes his way up the ladder, but a desperate Owens grabs Reigns by the ankle, leaving Roman to laugh as he spears KO through a table. Reigns tries to continue spearing Owens, but is tricked into sending himself through a barrier. Owens has his fingertips on the title, but Roman is able to pull him off the ladder in time. The two brawl but Owens is able to powerbomb Roman through a table.

As Owens climbs, Jey Uso attacks him and prevents him from taking the title. This gives Roman enough time to make his way to the top of the ladder and lock in a Guillotine, forcing Owens to pass out. Roman grabs the title and wins the match.

The only way to win this match is to light any part of the opponent on fire, so traditional Inferno Rules. Noticeably there isn’t the ring of fire around the ring. Early in the match, The Fiend suddenly summons multiple pillars and pads of Fire, surrounding the barricades but not touching the ring.

The Fiend grabs straps from beneath the ring to beat orton, even lighting one of the straps on fire and nearly burning himself in the process. He even pulls out a pickaxe in an attempt to possibly murder Orton.  He follows this by dousing a rocking chair with gas and attempting to light Orton with it. Orton escapes and attacks The Fiend with various weapons.

The fight continues on the outside of the ring, with Orton having the advantage. The Fiend gets Orton in the Mandible Claw, but Orton is able to turn it around and set The Fiend aflame. After delivering an RKO, he comes back into the ring with gasoline and douses The Fiend.  He contemplates for a bit before setting The Fiend on Fire in the middle of the ring and the flames erupt. Orton Wins as commentary freaks out.