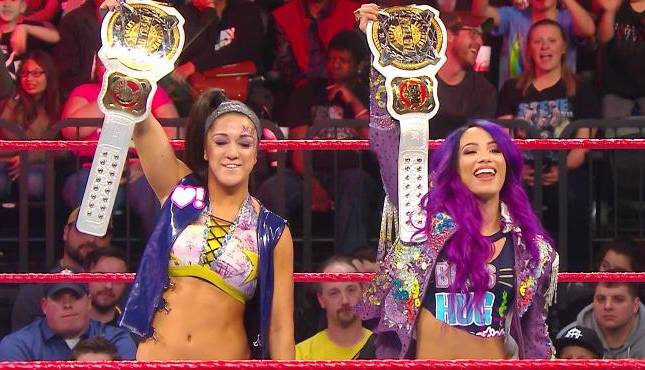 On this week’s RAW, a huge title match was confirmed for Wrestlemania. The Boss n Hug Connection were fed up with everyone chasing their titles, so they will be facing all of them at once.

The IIconics, Tamina and Nia Jax, and The Divas Of Doom have been chasing Sasha Banks and Bayley and now the match has been made official for the Grandest Stage of Them All.

So Sasha Banks and Bayley will be defending their WWE Women’s Tag Team Titles in a fatal four-way match against The Divas Of Doom, Nia Jax and Tamina and The IIconics. Anything could happen in this type of match.

WWE had teased a Team Bestie vs The Boss n Hug Connection match for Wrestlemania, but ultimately made it a fatal four-way match. We will have to wait until Wrestlemania to see what happens.

"If everybody wants to come for us, we'll take them ALL on…at #WrestleMania!" – @SashaBanksWWE #RAW pic.twitter.com/fq0RYMCHVl