Former WWE Superstar Gabe Tuft, known to WWE fans as Tyler Reks announced on Extra TV recently that they will be transitioning from male to female and will be known as Gabbi from here on. Tuft, made her WWE debut on the ECW brand back in 2009 with a surfer persona. Tuft was one of the participants in the 26 person pre-show battle royal at WrestleMania XXVI.

After working on the ECW brand for a year, Tuft joined the WWE Smackdown roster where she, saw the greatest success of her WWE career as part of team Smackdown which won the ‘Bragging Rights’ cup. Team Smackdown ended up doing this not once but twice. After competing in the Royal Rumble and another battle royal at WrestleMania, Tuft would be then moved to Monday Night Raw in the supplemental draft.

During her time on RAW, Tuft would team with Curt Hawkins and be in feuds with the likes of Alberto Del Rio. Tuft is also an accomplished fitness entrepreneur. A press release discussing the upcoming piece on Tuft’s transition on Extra hypes the segment as the following.

From Gabe to “Gabbi”. Gabe Tuft, a former WWE superstar, (ring name “Tyler Reks“) makes a long-awaited gender reveal exclusively on Extra TV. With a flair for flying kicks, quick takedown tricks and flowing dreadlocks, Gabe Tuft was once the WWE Superstar “Tyler Reks“, a tough pro wrestler who made opponents quiver. To the cheer of millions of adoring fans, he battled in iconic WWE mega TV events seen across the wrestling world such as Raw, SmackDown and WrestleMania. 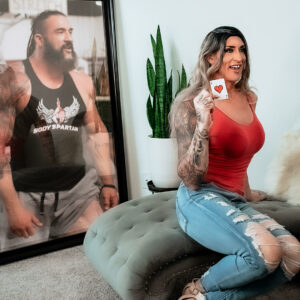