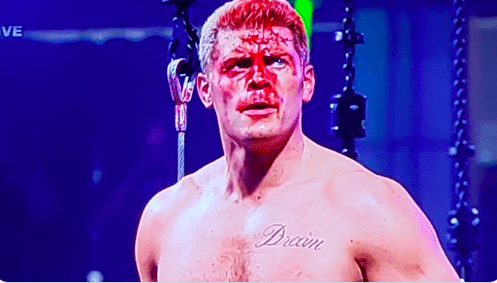 On this week’s episode of AEW Dynamite, Cody Rhodes faced Wardlow in the company’s first-ever Steel Cage Match. This was also the debut match for Wardlow in AEW.

The stipulation for the match stated that if Rhodes wins, he earns himself a match against MJF at AEW: Revolution. This was Rhodes’ final chance at redemption against MJF and so he brought everything he had to the table.

But Wardlow wasn’t shy to demonstrate his destructive capabilities either. The big man destroyed Rhodes’ forehead by repeatedly hitting it on the Steel Cage which resulted in a lot of blood pouring out of Rhodes’ head.

The match also saw many interferences from MJF, Arn Anderson and Brandi Rhodes.

Thoughts and prayers to our cameraman who got this INCREDIBLE angle of @The_MJF getting thrown into the crowd 🙏👀👀🙏 #AEWDynamite pic.twitter.com/bngeyvFgVJ

However, Rhodes went on the top of the Steel Cage and shocked everyone with a phenomenal moonsault on Wardlow to end things for good. The American Nightmare won the match and will now head to Revolution where he will face his former protege MJF.

HOW DID @CodyRhodes PULL THAT ONE OFF?!?!?! #AEWDynamite on @tntdrama pic.twitter.com/R8c6NgEU94