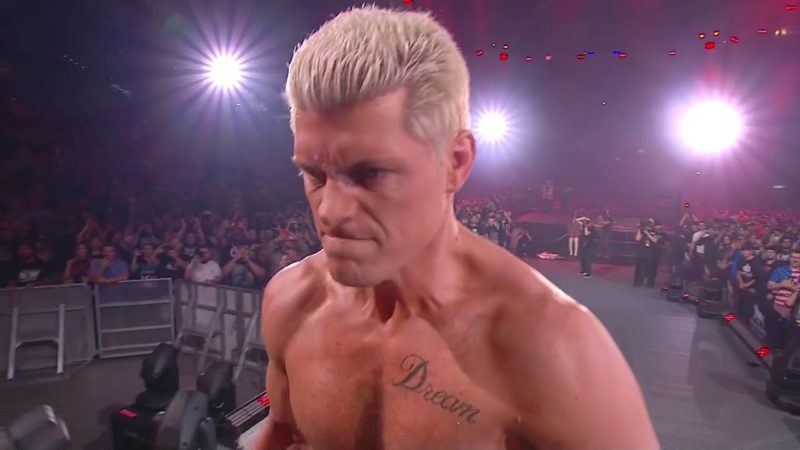 On this morning’s Wrestling Observer Radio, Dave Meltzer talked about how Cody Rhodes has injured himself while weight training before WWE Hell in a Cell. He heard from ‘multiple wrestlers’ that the injury is thought to be a torn pec – “Cody was there so they must have heard it from him.”

He was involved in an angle at last night’s house show in Champaign, IL rather than the scheduled street fight with Rollins. Dave and Bryan were speculating about what would happen with the main event for Hell in a Cell, noting the sensible thing would be to call off the match and get surgery, but that with Cody’s old-school mentality he would likely want to work the match.

Cody was recently interviewed by Steve Austin on the Broken Skull Sessions. The legendary WWE star ‘Stone Cold’ Steve Austin had infamously walked out of the company on bad terms. He recently stated that should have reached out to WWE Chairman Vince McMahon before departing in 2002.

McMahon wanted Austin to lose a King of the Ring qualifier against Brock Lesnar on the June 10, 2002 episode of RAW. While ‘The Texas Rattlesnake’ had no problem losing to the up-and-coming star, he only wanted to do so as part of a meaningful storyline. Certain disagreements led to Austin walking out of the company. Vince had eventually buried the star.

On the latest episode of his Broken Skull Sessions show, Austin spoke to Jeff Jarrett about some wrestlers’ inability to raise concerns with their bosses. Reflecting on his own communication problems over the years, the WWE icon recalled how he handled his booking against Lesnar the wrong way.

“I wish I would have communicated better with Vince back in the day when I had my issues with doing the favors for Brock that day,” Austin said. “All I had to do was show up at the building that day and talk things over, but I just took my ball and went home. It is all about communication.”

After Austin walked out, Vince McMahon punished him. The former WWE Champion was fined a whopping $650,000 to set an example to the rest of the roster that his actions were unacceptable. The figure was later reduced to $250,000. Austin had eventually returned to WWE but the dream match against Lesnar never took place. The Beast Incarnate said earlier this year that he does not hold a grudge against the Hall of Famer for not facing him. Fans would be disappointed that match would not take place ever.