Recently, Conor McGregor took to Twitter and in a series of now-deleted tweets, decided to go after every single person he has beef with. The former UFC two-division champion unleashed scathing rants on the likes of Khabib Nurmagomedov, Dustin Poirier and more. He also sent a message to UFC lightweight champion Charles Oliveira.

“Have that belt spit shined for me.”

He then went after Dustin Poirier. Conor McGregor followed up by listing a series of statements that make Poirier’s victory less important.

“Wow you guys! He checked the kick with his butt cheek. Jumping a guillotine is not a takedown. Absoring the kick into the leg is not a check. A doctor stoppage is not a tko. The game goes on bitc*es. Piss ants to me yous all are. Not even peasants. Piss ants! Now get to your stationed vlogger cameras you novice bums! #nobodies

After that, he decided to take a shot at Dustin Poirier’s wife Jolie Poirier as well as he replied to a parody account of Jolie, appearing to not have an interest in intimate DM’s with Jolie.

Stay out of my dm’s butch 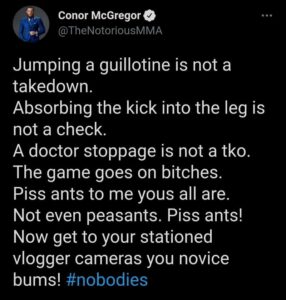 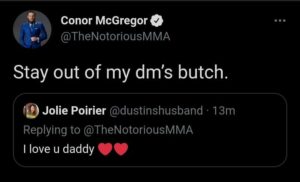