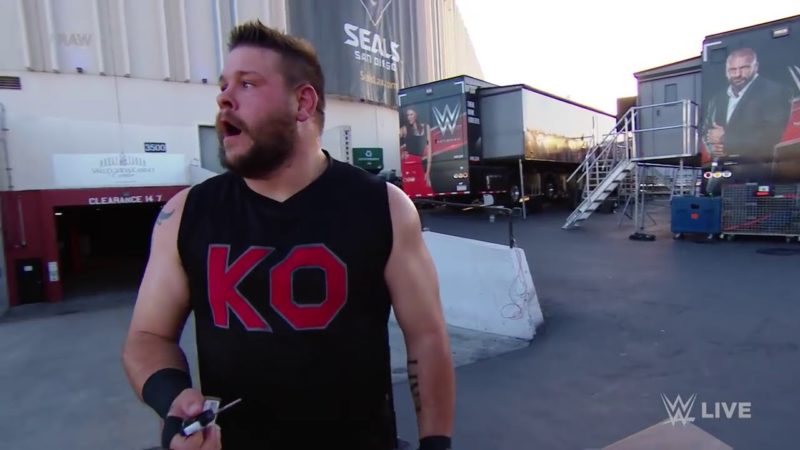 In a recent interview with the Argus Leader, Kevin Owens was asked about his infamous spot with Braun Strowman at Money in the Bank, and specifically how it felt to be thrown off a 20-foot-ladder onto a folding table…

“I don’t know how well it can go when you get thrown off a 20-foot ladder. I’m definitely feeling it; it was an uneasy morning. It’s not part of the risks we take as wrestlers, but stuff like that doesn’t happen every night obviously, but when you got these ladder matches, there’s high stakes, and everybody’s trying to make a name for themselves. Everybody wants to get the MITB contract; that usually means at some point they will become champion. That’s a big deal; that’s what everybody strives for. I’m a professional, and I get used to stuff like that, but I never experienced what I did last night. But I’ll be ready to go before you know it.”

Owens’ was also asked about some other interesting topics, including whether he has any pre-match rituals and if WWE gives him more leeway with his mic work:

“I don’t know what’s going through my mind. I don’t have any specific rituals. The only thing I’ll do every single time… not to get into the whole topic of religion here, but some people believe in God and some people believe in all kinds of things. I don’t have many particular beliefs, but I do believe in people who we’ve lost. I’ll speak to Owen Hart; he was a big influence on me as a young wrestler, and when he passed, I felt a great sense of loss. Ever since then I just talk to Owen Hart before every match and I ask him to be with me and make sure I don’t get hurt. Throughout the years I have added people to that list. I have lost people in this industry, and I speak to them as well, guys like Dusty Rhodes. And I’ll talk to my grandfather and grandmother who have also passed. I ask those people who are looking down on me to make sure I get through the match safely.”

“Everyone on the show gets to use their own sense of personality to whatever role they’re given or whatever lines they’re given. The people who do it best are the ones who get the most room on the show because that’s part of being a good performer and being a good WWE Superstar. Like everyone, sometimes I might feel that something I’m saying or something I’m doing should be done differently, but that’s my opinion. Sometimes I’ll state my opinion, and maybe I’ll be right or maybe I’ll be wrong and maybe people will use it later. But the point is, I have to deliver what’s asked of me as best as possible in a manner that makes it work for the show. That’s what I keep in mind, and I’m still able to bring my own sense of personality to it, which I think is a part of me as a performer. I may have patted myself on the back a little bit there!”

Here’s hoping the KO character ascends to the very top someday. He is certainly worth of it.