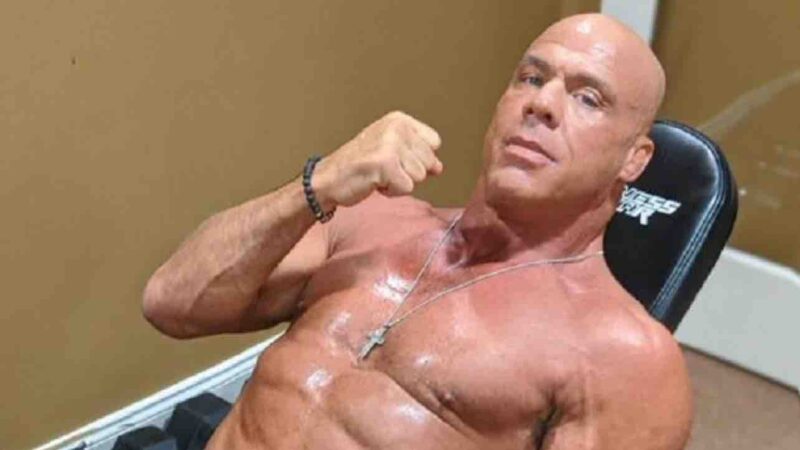 Kurt Angle previously spoke on Talk Is Jericho, where the Olympic Gold Medalist revealed that he was offered the job of being an NXT coach and that of Matt Riddle’s manager.

While speaking on his lastest AdFreeShows.com podcast, Kurt Angle gave an update on his condition after his double knee replacement surgery.

‘It’s a week later and I’m not doing much better. It’s pretty brutal, especially when you have both knees down at the same time. I never went through anything this difficult. I also have a little bit of a back problem, so I can’t use my legs and I can’t use my back, so I’m pretty much useless. It’s pretty crazy. But when I did the surgery, what they found out is they found a screw in my left knee just hanging out in my knee socket. It’s pretty incredible. It must have been from my surgery 10 years ago, the ACL surgery I had on my left knee. The screw popped loose and was just hanging out in my knee socket. It was crazy.”

“I started rehab the next day. I mean, they’re on you. They stay on you and they want you to work through it. The more you do without injuring yourself, the quicker you will heal. So they’ve had me do a lot of rehab ever since I got out of the hospital. So I go to a rehab facility three days a week near my house, and then the other four days, I do five different sessions of rehab on my own. So it’s a long process, but hopefully it will work out. It should and I’m very positive about this.”

“They’re trying to straighten my legs. That was a lot of the problem with my last knees. From all the injuries and everything, they stayed bent. It was wearing on my knees and that’s how I got arthritis in my knees because I couldn’t flex my quad extension fully. My quad was always on fire when I was walking and that put a lot of pressure on my knees. So that’s the reason why I had to have knee surgery because my legs won’t straighten out entirely. That’s what they’re trying to do now is straighten them out.”