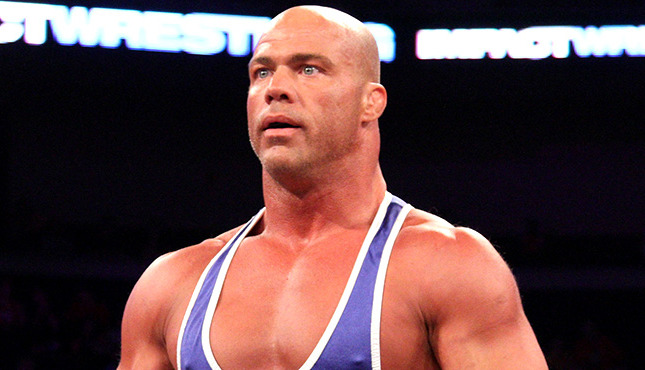 Kurt Angle recently appeared on The World According to Wrestling podcast to discuss various topics. Here are the highlights.

On returning to WWE:

Well, for one, I don’t want to go back right now. Two, between 2008 and 2013, I got four DUIs. As a publicly traded company, it doesn’t matter if you’re Kurt Angle, Stone Cold Steve Austin or The Undertaker, when you get involved in that kind of trouble consistently, that’s the last thing they need. So when I did try and go back a year and a half ago, I think they were thinking “Let’s see how he pans out, let’s see if he can stay clean, let’s see if he got his shit together” so I think that’s part of it. I don’t blame them for that. I actually knew ahead of time that they were most likely going to say no. And I knew it was because of my own actions. But being clean now for three years and abiding by what I have to, I know that there will come a time where I will go back.

There are a lot of reasons. The main reason was the work schedule. I was probably on the road over 300 days a year. I was getting injured quite a bit. I did have a problem with painkillers. When they brought me into ECW, I felt like it was a demotion. Even though it wasn’t. I don’t think they planned it to be. They didn’t mean to, but they set that company up to fail. And I felt like I was part of it.

On being inducted into the WWE Hall of Fame one day:

Honestly? It’s not that important. I mean if they don’t induct me, that’s not going to kill me. To be honest with you, I would find it very hard to believe that they are not going to [laughs] especially with my talent, but it will come. Either way, I’m good with it. You have to remember that not only did I have those troubles in the past but I left the company high and dry. Now, I did it for my own reasons and I did it for health reasons. And I’m glad I did it because I don’t know where Kurt Angle would be right now if I had’ve stayed. So I did the right thing. And whether they understand that or not is up to them but the thing is I know that a lot of fans want me to go back and finish up where I started. And I think that just about every wrestler has been able to do that. I expect it to happen. For me, I don’t want to do it this year. I’m not even sure if they want to do it this year. But eventually it’s going to happen.