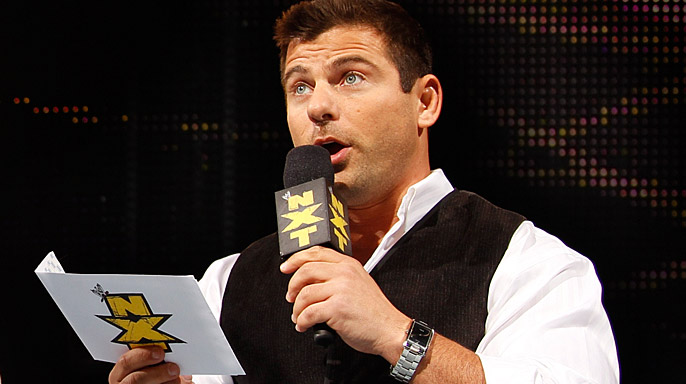 The Two Man Power Trip of Wrestling sent us the following:

Today The Two Man Power Trip of Wrestling is joined by the Lead Announcer for El Ray Network’s Lucha Underground, Matt Striker. John, Chad and Matt get down and deep regarding the success of Lucha Underground and how with the way viewers consume television in 2016 Lucha Underground stands to be a difference maker in how people view Sports Entertainment. We also break down Matt’s entire WWE career and find out how a kid from Brooklyn became the kind of breakout star he admired as a lifelong fan of Professional Wrestling.

What can Lucha Underground’s Season 2 possibly offer to fans that enjoyed Season 1 so much:

I say this a lot and it always seems to come up and it always seems to be so fitting but if you want to hear God laugh, you tell him your plans. I think I’ve learned from wrestling and from television that you do what you are there to do and you don’t think about tomorrow, tomorrow has enough thought’s of it’s own to paraphrase so I don’t think we know. I think we were having a great time doing Season 1 and other people felt that energy and here we are doing it again and hopefully again and again.

Using the word “Season” when referring to Lucha Underground’s presentation of stories:

Well first and foremost I think certain words have worked their way into our lexicon in 2016 that weren’t readily at the tip of our tongues in 96. With that said, I think the great term and I don’t think they intended it to be this pure and honest when he coined it but it’s Sports Entertainment. When you say “Seasons” baseball has a season and Shameless on Showtime has a season so I think that what Lucha Underground is doing is its becoming a sport as well as television show. So the person that says well I don’t watch wrestling but they watch Lucha Underground versus the people that say they don’t really watch Tele Novella’s but they watch Lucha Underground is that it’s able to cross everything for a lack of a better term.

Now being a “Lead Commentator” vs. being the “color guy” partners of his getting criticism:

I think that my origins in my teachings lend themselves that whomever is in the chair next to me I am going to work to their strengths in a way from what I perceive to be their weaknesses and I hope that people do the same for me. I don’t think the whole assignment of what position am I playing today, am I playing first, am I playing the outfield, I think I am just going to try my best in whichever chair I am sitting in whether it is a two man booth or a three man booth. If people knock Yoshi Tatsu, I use what I am with and who I am working with and I love Yoshi and think he did a great job and I’ll talk about that for days too.

What it is like announcing beside Vampiro and how have they built their chemistry to be one of the most solid announce teams in wrestling:

I think first and foremost Vamp and I are really a lot better away from wrestling then we are when we get to the building and get to the ring. We kind of do avoid each other for the most part of the day because we understand the whole rigamarole that gets involved but then five minutes before showtime we together and we have a little room that we spit some lines at each other for about five minutes and we go out there like a band and like a team we just play. I can explain it, it’s almost kindred.

Filming the opening scene of Season 2 and picking up Vampiro from the Insane Asylum and the production value of the overall show.

It was definitely a lot of fun. I don’t mean to be self deafening but you could have put a monkey in that scene and it would still look cool. It’s just the way it is shot. It was very cool to be a part of it and to see it come to life, out of the guy (who’s name is Skip) to see it come to life out of his mind on to the screen is thrilling and is inspiring. The beauty of the show is it crosses boundaries. I am reminded of movies like Goodfellas or shows like That 70s Show where they were shot in a way that they were to convey something like a time period and the way it’s shot it conveys something to the viewer and that is a tip of the cowboy hat to Robert (Rodriguez) and everybody else involved in the production and the concepts.

Wrestling fans evolving and wanting to be in on more of a “cool wrestling product”:

It is a great question and an analysis and more of a commentary on society as a whole. What is happening that I am noticing you are getting these dissects of fan-bases. You will have almost the “hipster” equivalent to the fan-base that says look at me I am so knowledgable and I can grow a beard and I happen to know when Nakamura first wrestled, ok dude I get it and that’s great but the fact that I know Tommy Rich and Buzz Sawyer doesn’t make me any different nor better nor anything of a fan than you. So there seems to be that divide. There is also this wave of and I feel like the Lucha Underground fan doesn’t want to know the spoilers, they don’t want to know the guy’s real name, they don’t want to know that this guy is dating that girl, they just want to watch the wrestling and that is the kind of fan that I was. I think the Lucha Underground fan is like hey man I like this and I know Breaking Bad isn’t real and I know the guy doesn’t have cancer but they want to watch and there you go.

In the over ONE HOUR interview with Matt Striker he breaks down his entire run with WWE, his back and fourth duties between wrestling and announcing, Working with WWE Legends, Learning from Vince McMahon, Working Wrestle Kingdom and where he sees Lucha Underground heading beyond Season you will definitely want to DOWNLOAD THIS EPISODE to hear everything from the mouth of YOUR TEACHER!