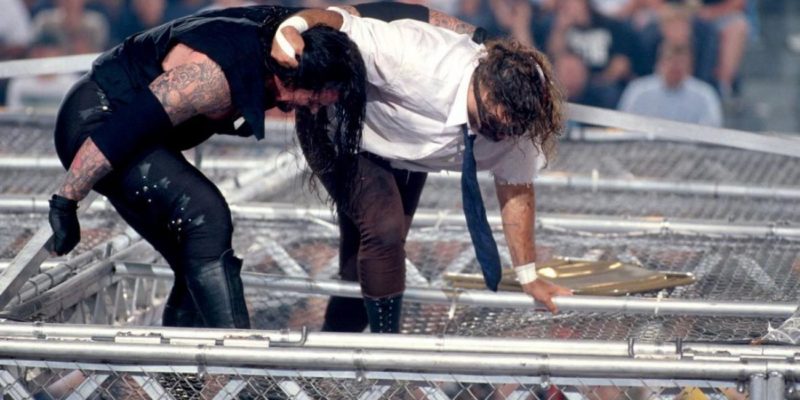 In a recent interview with the Two Man Power Trip of Wrestling Podcast, WWE Hall of Famer Mick Foley discussed his “20 Years of Hell Tour” and also the infamous fall which occurred nearly 20 years on this date, including the impact it has had on his life and the business in general. The episode can be downloaded here.

Looking back at the Hell in a Cell match 20 years later:

“It is definitely cathartic to talk about it. I’m kind of finding out new elements about the match as we go. Especially since it was a match that I kind of ran from for so many years and did not want to talk about it but after a while and I guess in the same way that Adam West came to terms that he was Batman and I know there are some other actors that have kind of felt pigeonholed, I didn’t want to be known for just that one thing. But after it awhile it was like maybe this isn’t the worst thing to be known for but it has been really cathartic to discuss it and I can honestly say that these have been the most fun shows and the best shows that I have done.”

What was going through his head while he was descending from the Cell:

“It’s funny because in the show I only curse once. It is like a two-hour show with a Q and A and I curse one time. But it turns out that I think in curses and that all I was doing was dropping f-bombs to myself before and after. It was what the BLANK was I thinking? And you’ve got to be BLANKING kidding me? It is why I was so glad when (Chris) Jericho’s Book “A Lion’s Tale” came out he talked about wanting to do something from the top (of the Cell) but when he went up there earlier in the afternoon {which I didn’t do or otherwise we wouldn’t be having this conversation right now} and he said the people down below looked like ants and I’m not exaggerating, they looked like ants and I thought to myself that is exactly what they looked like. If I could have thought of a graceful way to climb down the cell structure without ruining my career, I believe I would have done it.”

Watching the Shawn Michaels vs. Undertaker cell match prior to his battle with Undertaker:

“The match that Shawn had with Undertaker is still to me the best Cell match we’ve ever seen and that there has ever been and I wasn’t so worried about overshadowing it, I was just trying to not embarrass myself.”

The Jim Ross commentary track being used all throughout pop culture:

“We are kind of tied at the hip because of that night and it has gone on to become a part of pop culture. I don’t know if there hasn’t been a route at some sporting event where someone hasn’t thrown up the meme of “someone stop the damn match” and it has really added so much to that match. I think it is one of the most powerful ways to experience the Cell match without watching it at all and to just listen to JR’s commentary because it is really extraordinary. JR didn’t know what was going to unfold that night and he said that he undoubtedly would have come up with something great but that spur of the moment call, I’ll put it up there with anything I have ever heard in sports history. I said that in my book in 1999 and you can have “Do you believe in miracles”, “The Giants win the pennant” and in my mind “With God as my witness he’s been broken in half” is as good as anything that I have ever heard anywhere.”

[Credit: The Two Man Power Trip of Wrestling for the above transcription]

20 YEARS AGO TODAY – a night that changed my life forever. pic.twitter.com/K44yjw3Zma