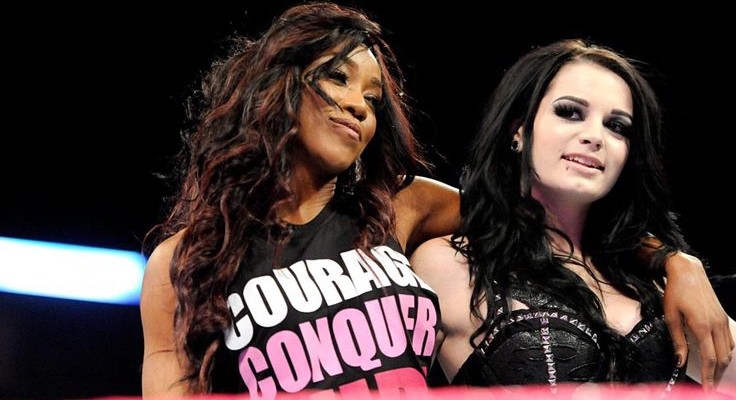 TMZ reported earlier this week that both Paige and Alicia Fox were kicked out of the Supano’s Prime Steakhouse, Seafood and Pasta in Baltimore Sunday night.

The Divas had a couple drinks when one person began harassing them by taking pictures and videos.This led to Paige and Fox throwing drinks at the person, which resulted in the girls being kicked out of the restaurant after staff had to step in and break it up the incident.

In an update, Paige did a Q&A session (news bit courtesy of Pro Wrestling. Net) at the Wizard World event in Baltimore recently and gave her side of the story.

Paige claimed that this was not a scripted scene from Total Divas nor was any of the crew members from the reality show was at the scene of the bar fight. Since it was karaoke night, Paige went to do a song when a women starting filming her without her permission.

Once Paige finished singing, she went up to the woman and asked her not to film or take pictures of her without her permission. However, this did not sit well with the women for whatever reason thus she gave Paige a piece of her mind, which were expletive words towards Paige. This led to the woman throwing a drink on Paige, and Paige was like “oh no you don’t.” The woman was like let’s take this outside and Paige asked what are you 12.

This is when some employees stepped in and took Paige and Fox out a back door. However, the women with one of her friends met them outside, which led to Paige and Alicia Fox apparently walking up to the two women. According to Paige, they approached the woman and was like you wanna do this and the woman was like maybe next time.