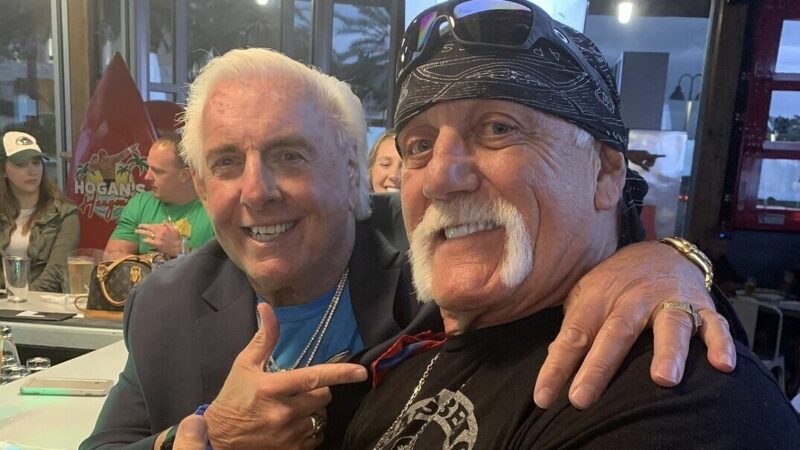 Hulk Hogan has announced that his daughter Brooke Hogan and Ric Flair will be doing karaoke together at Hogan’s Hangout. Watch video of Hulk making the announcement below.


Hulk Hogan is a WWE Hall of Famer, but sadly WWE just canceled plans for another Hall of Famer. WWE Hall Of Famer Kurt Angle remains one of the most technically-gifted pro wrestlers to have ever stepped foot inside the squared circle. He had arguably the best rookie year in WWE history as he won the WWE Championship within a year and competed at the highest level for many years after that.

WWE Chairman Vince McMahon has the final say in anything and everything that goes on in the company, for better or worse. Kurt Angle recently claimed that WWE had canceled his plans to make a brief return to WWE three weeks before WrestleMania 38, where he was going to be involved in a program.

However, it seems there might be more to the story than previously thought. According to a report by Ringside News, a tenured member of the creative team stated that Kurt Angle was never planned for a program at WrestleMania 38. He was brought in for the Royal Rumble to do “documentary interviews and such.”

Kurt Angle’s final pro wrestling match happened at WrestleMania 35, where he put Baron Corbin over before ending his in-ring career. Kurt Angle’s retirement match was cramped between the two featured matches of the WrestleMania 35 card. Angle would reveal back in the Summer of 2021 that he had received offers from All Elite Wrestling as well as Impact Wrestling to return to in-ring action in 2019 but would turn those down because the WWE Hall of Famer wanted to remain loyal to WWE.

It was further said that “the three-week program he’s talking about was a pitch, but never anything Vince signed off on.”

Kurt Angle said that a 3-week WrestleMania angle was nixed for him, but we were told that's not really the case.

There was a pitch, but Vince McMahon never signed off on it. It was never actually booked. Angle was brought in for the Rumble only to do interviews for WWE docs.