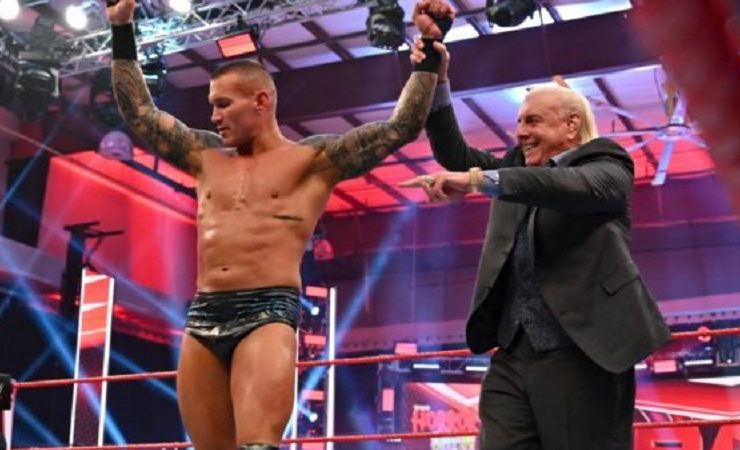 With the current coronavirus pandemic, the last place WWE Hall of Famer Ric Flair should be is inside the Performance Center. Though if The Nature Boy has his way, he will be in Randy Orton’s corner at SummerSlam.

“Some people are just happy to go home and sit on the sidelines. I love to always be doing something,” the Nature Boy shared. “To be 71 and even be on TV and be involved with WWE, that’s huge for me.”

Ric Flair recently stated to TV Insider that he is trying to get the higher ups in WWE to let him manage Randy Orton for his upcoming match with Drew McIntyre set to take place August 23rd at the WWE SummerSlam pay-per-view.

“The thing with Orton is it’s a real life story. His dad and I have been friends since the ‘70s. We probably started around the same time. I watched Randy grow up, I was there the day he came up with Dave [Bautista] in Evolution.” Flair continued on, “I don’t know if I would have that same impact on a lot of people. I certainly would love the opportunity, but I think it would have to be one of those scenarios. I’m trying to get me to manage Randy against [Drew] McIntyre [at SummerSlam].

The WWE Hall of Famer appeared alongside The Viper in recent television appearances during Orton’s kayfabe feud with Big Show, which led to an Unsanctioned Match Flair and Orton worked well together and it showed in the outcome of the show.

As to whether Flair will be given the opportunity to manage The Viper for the Randy Orton vs. Drew McIntyre match at SummerSlam, Flair states, “I don’t know. I haven’t heard back, but it’s not because I’m not trying.”