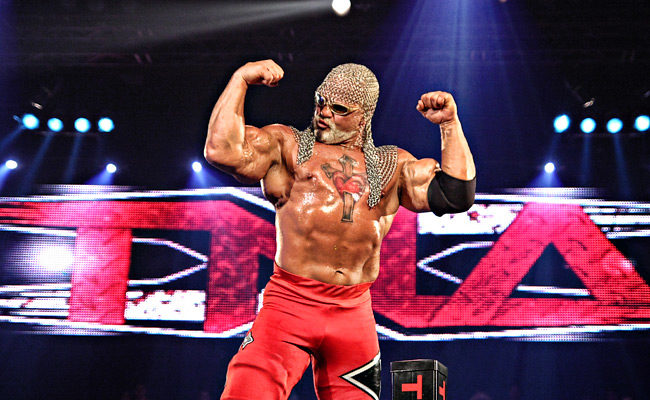 Big Poppa Pump Scott Steiner is scheduled to team with Josh Matthews against Joseph Park and Jeremy Borash at the July 2 Slammiversary PPV and he took a media call today to promote the show.

One of the questions aimed at Steiner was around the state of the wrestling business in 2017 and what changes he would make to improve it. His answer unsurprisingly took aim at WWE, but also targeted specific executives Stephanie McMahon and husband Paul “Triple H” Levesque:

Yeah, the first few changes they need to get rid of Stephanie McMahon and Hunter McMahon. Cause they’re two idiots that are running the whole place up there. It’s like, I mean, I feel sorry for the wrestlers up there, they gotta follow the instructions of these two idiots that clearly don’t know what they’re doing.

People don’t wanna watch it because the ratings are down and the reason why I call Hunter McMahon is because she obviously wears the pants. He’s a ball-less walking around human being.

Regardless of the bad blood, the former WWE Tag Champion wouldn’t rule out a potential Hall of Fame induction down the line:

He doesn’t mince his words does he.