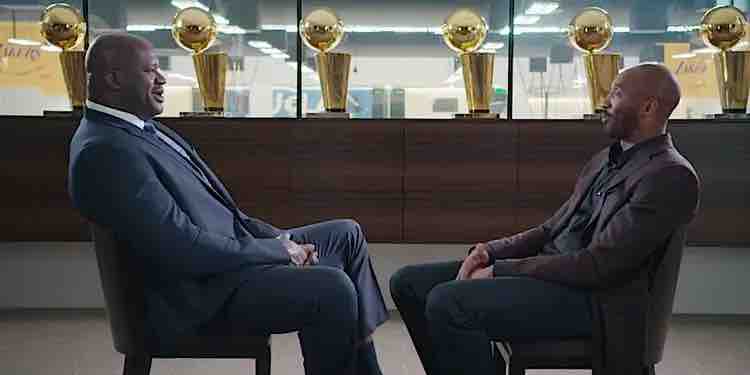 It’s a little too late for “I should have’s”. Most real men don’t say, “I coulda shoulda woulda”. It’s a coward’s copout, and a wimps vehicle for gaining pity where pity is emphatically not due. NBA’S Shaq, a supposed big tough guy is now showing his true colors – that apparently he aint so tough after all. The tall man whose career ended many moons ago, decided to hop back into the media court recently, suggesting he regrets his feud with the late Kobe Bryant.

Yahoo News reports that Shaquille O’Neal and Kobe Bryant waged one of the most famous feuds in NBA history — until Bryant died in a helicopter crash in 2020. Even though their relationship became a little healthier before Bryant’s death in 2020, Shaq, almost three years later, has some regrets, and he revealed the last words he and Kobe said in person to each other. Are you ready to take out your handkerchief? Lets dive right into to what Shaq said most recently…

While they won three NBA championships as fellow Lakers from 1996 to 2004, their dynastic reign was marked by what coach Phil Jackson called a “juvenile” feud that included competing over jersey sales and public swipes to the press, per Lakers Nation. Now that does sound infantile.

Shaq demanded to be traded and left the Lakers for the Miami Heat in 2004. While millions mourned the end of their pairing, the two eventually put their differences aside.

“[I thought], ‘We’re both going to get old”, said Shaq. “We’ll both be at the 50-year Lakers anniversary,” he told People. “Other things shouldn’t have been more important [than getting in touch], but little things [got in the way].”

What little things Shaq is referring to we’ll never know. What we do know is that Shaq should remain focused on the present and stop dwelling on the past. His and his families lives will do better if he does.