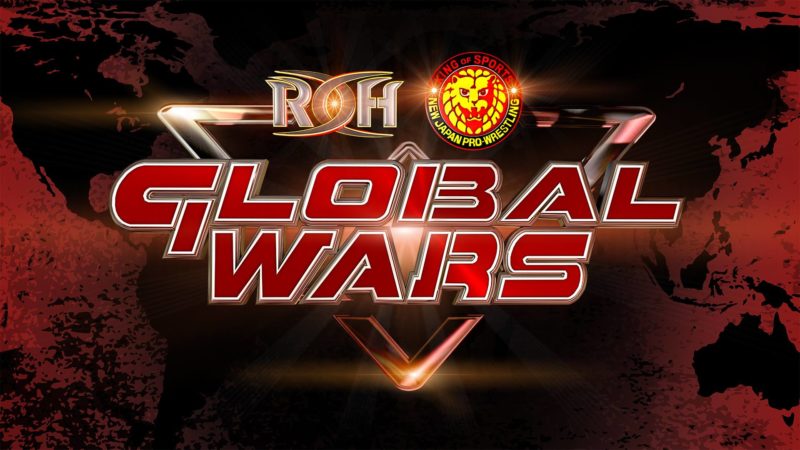 We are less than one month away from GLOBAL WARS and the WAR OF THE WORLDS TOUR!  The collaborative relationship between Ring of Honor and New Japan Pro Wrestling continues, bringing you matches and experiences you can’t find anywhere else!  First up, onSunday May 8th, GLOBAL WARS is coming to you LIVE on pay-per-view from Chicago Ridge.  This massive event kicks off a busy week for the stars of ROH and NJPW, who are hitting the road to Dearborn, Toronto, and New York City.  Tickets are still available for Dearborn and Toronto while Chicago Ridge and New York City are sold out!

With GLOBAL WARS already sold out, you can still catch all of the action on PPV!  Incredibly, COLT CABANA has returned to Ring of Honor and he takes on ROH World Champion JAY LETHAL in the GLOBAL WARS main event!  But that’s just one match in a full night of the best professional wrestling on the planet.  Signed for GLOBAL WARS live on pay-per-view:

On May 8th, GLOBAL WARS sees a match that truly exemplifies the power of the relationship between New Japan and Ring of Honor.  Four of the most exciting stars in the entire world of professional wrestling are coming together in an tag match that might steal the whole show!

Moose has risen through the ranks of ROH thanks to his unparalleled athleticism and connection with the fans.  Win or lose, every Moose match is a memorable experience from this likely future World Champion.  Stokely Hathaway has ensured that Moose keeps getting bigger and better competition.  But his greatest accomplishment yet might have been signing an incredibly high profile match at the 14TH ANNIVERSARY against then-IWGP Heavyweight Champion OKADA!  While Moose was not successful that night, he proved to Okada that he belongs in the ring right alongside him.

Thanks to the respect earned in Vegas, Moose and Okada will team up at GLOBAL WARS!  But they’ll compete against a team that, while relatively new as a tandem, have seen incredible success: Michael Elgin & Hiroshi Tanahashi.  Elgin and Tanahashi first made waves at the 2015 Global Tag League for NJPW, where they racked up a high standing and established themselves as a force in tag wrestling.  Recently, along with Yoshitatsu, the team captured the NEVER Openweight 6-Man Tag Championship!  Elgin and Tanahashi have meshed their styles flawlessly, even becoming friends and training partners while in Japan together.

There’s no other way to say it: this match will be AWESOME!  While GLOBAL WARS has sold out, you can still catch it LIVE on pay-per-view!