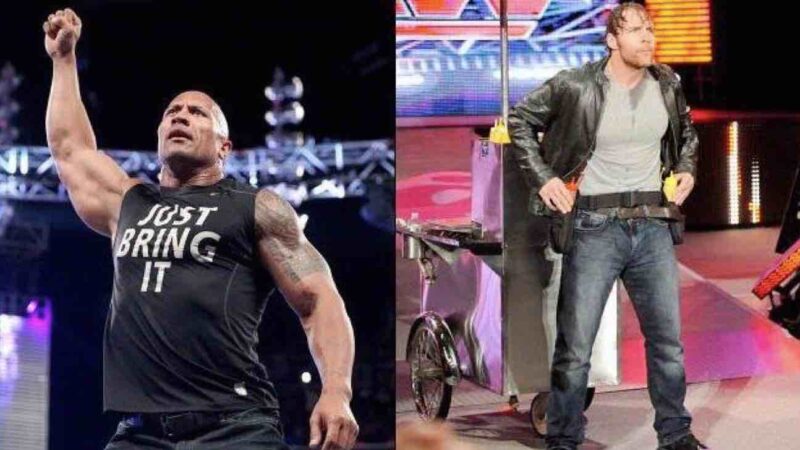 The Rock is undoubtedly one of the biggest stars of WWE. He is currently busy with his hectic Hollywood schedule but has been making sporadic appearances for the company. Back in early 2013, ‘The Great One’ began a feud with CM Punk, who was the WWE Champion at the time. On the go-home show for WWE Royal Rumble 2013, The Rock was brutally attacked by The Shield: Jon Moxley, Roman Reigns, and Seth Rollins.

The Rock recalls the reaction of Roman Reigns and Seth Rollins

Following the attack, Punk cut a promo on The Rock, while The Great One could be seen spitting blood in the ring. While speaking with Seth Rollins, Becky Lynch, and former WWE writer Brian Gewirtz on an Instagram live session, The Rock recalled Seth Rollins and Roman Reigns’ different reactions to him bleeding at the mouth.

“You know what was really cool? When The Shield attacked me before WrestleMania and powerbombed me, and I remember Seth… I was on Roman’s shoulders. He threw me down so hard on that mat. Busted my blood vessels, blood started coming out of my mouth. Roman looked down and was like, ‘You okay, Uso?’ And as far as I can answer, Seth was like, ‘Who gives a sh*t!’ and walks away.”

The Rock is very likely to face off against Roman Reigns at WrestleMania 39 next year. Fans have been buzzing about a possible blockbuster clash between between the two. A report recently emerged which provided an update on the possible clash. It noted that there is a clear idea for the match to happen at the Premium Live Event next year.As per the reports of Dave Meltzer on Wrestling Observer Radio, the current plan is indeed for this bout to headline the April 2023 event: