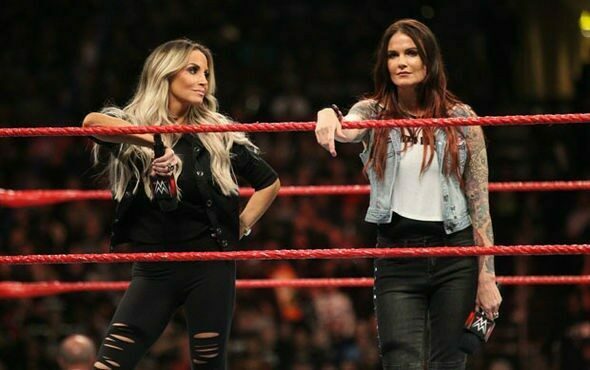 Trish Stratus recently dropped a picture on her Instagram with her best friend and former arch-rival in WWE, Lita. The picture was uploaded ahead of the 2022 WWE Hall of Fame induction ceremony that was headlined by The Undertaker. Stratus and Lita were seen twinning.

Trish Stratus reveals how Lita once saved her

Trish and Lita have given some memorable matches to the WWE universe back in the day. Their rivalry remains to be one of the greatest chapters in Women’s Wrestling. Trish recalled the WWF Invasion event. They had won a Bra and Panties match against Stacy Keibler and Torrie Wilson. Stratus and Lita headed up the unique V-shaped ramp. Stratus almost fell, but thankfully, Lita grabbed her by the arm, stopping her from falling backward quite a distance onto the unpadded concrete.

Trish had posted a picture together with Lita on Twitter, where a fan posted a clip of the latter grabbing Stratus’ arm. The 7-time WWE Women’s Champion retweeted it, saying that this was the time that Lita had “literally” saved her from falling to her death.

The two Hall of Famers has even spoken about the incident before during an interview, where Trish once again said that Lita had saved her life.

The 7-time women’s champion also recently appeared on WWE’s The Bump this week and stated that Lita did an incredible job despite being away from the squared circle for a considerable period.

“Oh my god, I was so proud of her. The things that she delivered, she just did so well. And I know, any of us, I am talking about me when I went back, Lita went back, I know Stone Cold Steve Austin is going back. It is like you are going back to something you haven’t been to for so long. But I will tell you we realize that it is in us.”

“You get in that environment and it just comes. I know Amy [Lita] was super nervous going into it. But as soon as she went back to it I just knew she was back. It was Lita, the fans were behind her and she was feeling that and she delivered. They had a hell of a match. Both of them did amazing and I was so proud watching her.”