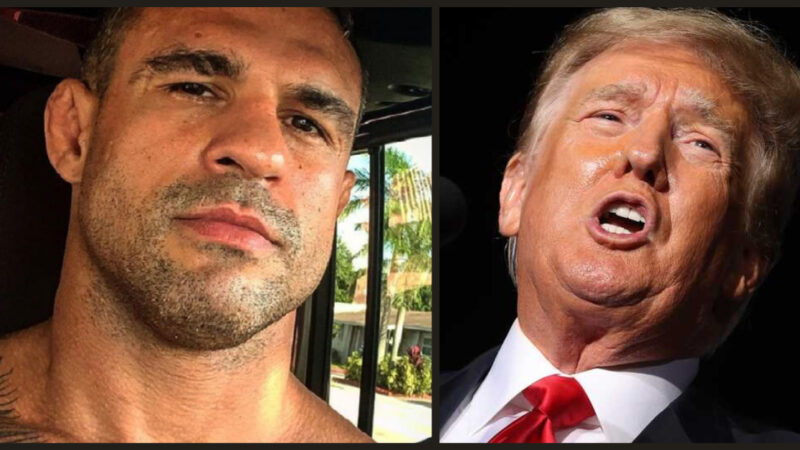 Vitor Belfort has some strong opinions about the former president of the United States as many do. While Evander Holyfield had a lot of good things to say about Donald Trump stating: “When Atlantic City became real big, it’s because Donald Trump was running boxing. He did a great job, and I’m honored to know that he would come here and be part of the commentary,” Vitor Belfort had a decent amount to say about all of this as well. Evander Holyfield Drops Donald Trump Bombshell.

The most Donald Trump thing that Donald Trump could ever do as Donald Trump is commemorating 9/11 by calling a boxing event. Yes, Donald Trump has called it a ‘commemoration’. The former president will be calling the fight between Belfort and Holyfield this Saturday which will be the 20th anniversary of the tragic events that took place in New York City on September 11th, 2001.

With Donald Trump and Donald Trump Jr calling the fight, Vitor Belfort had the following to say about the situation: “I love it, we are bringing understanding that it’s entertaining. Donald Trump is a great figure, and he can get things done.” Ironically, this sounds like something Donald Trump would say about himself as well.

None-the-less, we are truly in for a treat this Saturday to see what all goes down. This won’t be it for Vitor Belfort as he still wants Oscar De La Hoya. De La Hoya had to drop out of this fight due to catching Covid. De La Hoya is home now and recovering and Oscar has stated that he wants to get this fight in as well.

I am sure we will see the two go head to head someday, but let’s get through Saturday first.

Vitor told Donald Trump Jr. in an IG Live video, “You can like black, you can like different colors, but what makes America great, and why I came to become an American, is the promise that you can realize your dream. [Donald Trump] has always been advocating that. He created a show that went viral, people loved it. Everyone in Brazil loves the show. He gives people an opportunity to thrive. “

“The thing I like about him is he’s uncensored, he says things in his head.

“I remember when [Donald Trump] bought Affliction, I just remember meeting him and his passion. Just to see something, and say this is a great industry.”

A post shared by Vitor "The Phenom" Belfort (@vitorbelfort)