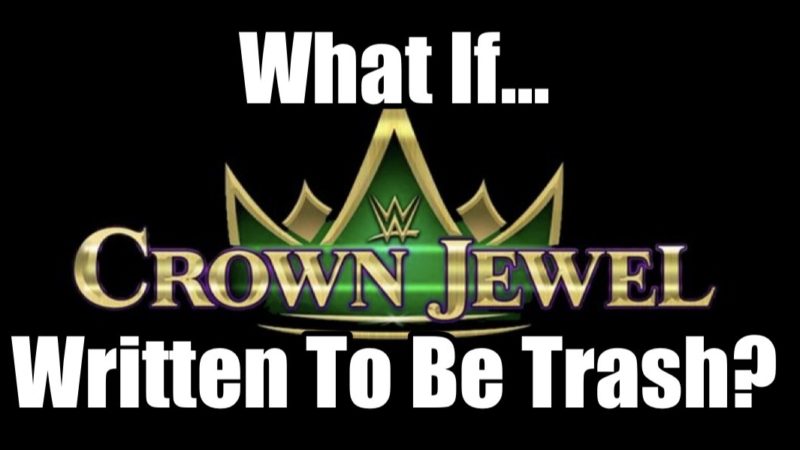 Good Evening wrestling fans and welcome to the fourth segment of What If? This is an article about the What If’s? Of course, WWE won’t give us what we want because our wants are not, “What is best for business”. So, we will make it “our business”. Without further ado, What If…WWE purposely scripted Crown Jewel deficiently to upset Saudi Arabia?

This episode is a week early because of the Crown Jewel event. There is only one word to describe Crown Jewel. TRASH! While sitting through the event, I contemplated, perhaps WWE might have scripted Crown Jewel to be disrespectful purposely. Just think about it, since the murder of Saudi journalist Jamal Khashoggi inside the Saudi consulate on October 2nd, WWE received criticism for refusing to cancel the event from the fans and government. Some of the pushback has even come from within the WWE locker room. John Cena and Daniel Bryan both refused to participate at Crown Jewel, despite both having an eminent role in the event.

WWE recently signed a ten-year contract with the Kingdom of Saudi Arabia. Since signing the deal, WWE has been criticized for omitting female wrestlers from all its Saudi Arabia events, in accordance with the country’s strict laws, in addition to following through with the Crown Jewel event after Khashoggi’s death. However, WWE stock continues to rise. The consequences of WWE pulling out would violate their contract and I am pretty sure Vince McMahon does not want King Salman or the Crown Prince on his execrable side either.

This leads me to believe that WWE purposely sabotaged the event. From the start, it all appeared to be an insult event. Hulk Hogan shows up in his red and yellow Hulkamania gimmick blasting Real American. Hearing the crowd sing along to Real American was amazingly ironic. Hogan has not been involved with the WWE for 3 years since his suspension and Hall of Fame removal. What a time to come back right?

Having the New Day come out on a “magic carpet” was another hilarious highlight. How many undercover jabs could WWE throw toward Saudi Arabia? We were guaranteed a new Universal Champion and oh boy did we get one waste of a highlighted match. Braun Strowman has been thrown in a dump trunk, crushed by the arena set and hit by a car. But taking the Universal Championship to the back of the head and a few F-5s destroy him? (Insert Eye Roll Here) What a way to give the Saudi crowd another immense slap in the face. We all knew Lesnar was becoming the Universal Champion but there was always the possibility that WWE would make the educated choice to carry on Roman Reign’s work making the Universal Title exist again.

All this match did was make Baron Corbin look like a “petty” (no foul language here) General Manager. Manifesting the fact, Brock still does not care about putting on a proper wrestling match and substantiated the fact, WWE had no idea what they want to do with the Universal Title. The title will disappear again and show up when Brock Lesnar wants to show up. But Saudi Arabia got one heck of a title match, right?

The key point of the event was the World Cup Tournament to establish the Best in the World status. Spoiler Alert, CM Punk was not there to claim it. Overall, the tournament matches were decent. The tournament boiled down to Dolph Ziggler and The Miz. High hopes were set for the possibility of a pretty epic match, but WWE needed to continue slapping the Saudi Arabia crowed in the face. So, we have the Miz “tweak his knee” with Shane McMahon taking the spot and destroying Dolph Ziggler. Shane claims the “Best in the World” status. Wow, WWE found another way to make Dolph Ziggler look weak and ruin the Crown Jewel event for the crowd and the fans. Bravo! Well done again.

The final match was D-X vs. The Brothers of Destruction. What a botch of a match. Kane looked confused after Triple H’s torn pectoral for the rest of the match, to the point where his mask comes off. I would like to point out that in the first installment of What If… I stated that Shawn Michaels could carry the Undertaker. Not only did he carry the Undertaker, he carried Kane and Triple H as well. Kudos to the Heartbreak Kid for still having the show stopper ability after being retired for eight years and at 53 years old.

In conclusion, the event was a total slap in the face to Saudi Arabia and the fans. Purposely done? We will never know but a six-year-old could have written a better script. I am sure the fans in Saudi Arabia are even more disappointed than we were. Let me know what you all think. Do you think the Crown Jewel was purposely written to be so bad? Is WWE trying to move away from Saudi Arabia after Khashoggi’s death? It just seems that WWE had too much to lose if they backed out of the event. Nothing stated the event had to be spectacular. They just had to put on a show. I’d love to see your comments below and will respond and interact.