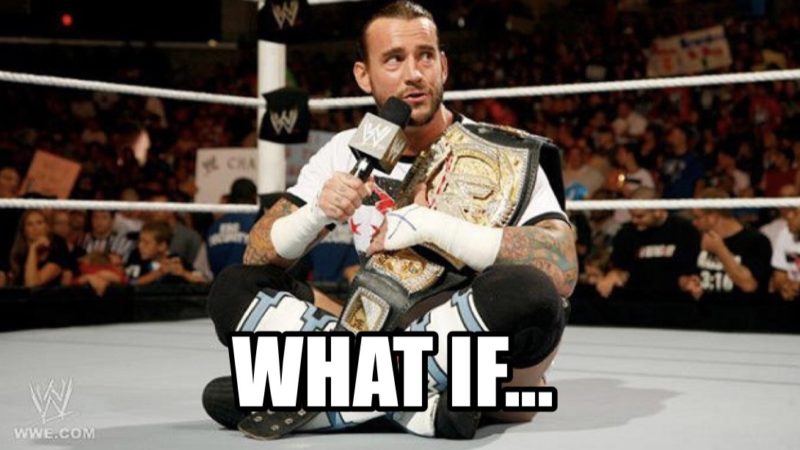 Good Evening wrestling fans and welcome to the sixth segment of What If? This is an article about the What If’s? Of course, WWE won’t give us what we want because our wants are not, “What is best for business”. So, we will make it “our business”. Without further ado, What If…CM Punk did not walk away from WWE?

It has been over four years since CM Punk stepped foot in a WWE ring. In fact, his last match was at the Royal Rumble January 26, 2014. CM Punk stated that years of not being treated the same as the likes of John Cena, The Rock and Brock Lesnar, Punk chose to walk away from WWE. He cited numerous reasons that included medical issues, such as an untreated MRSA infection on his back, lack of passion for wrestling and a general disdain for the company as a whole. The biggest CM Punk complaint is never main-eventing WrestleMania.

So what if CM Punk did not walk away from the WWE? Some of the matches we could have seen Punk have with Styles, Kevin Owens, Nakamura, Finn Balor are just a few dream matches. Can you imagine a microphone war between CM Punk and Kevin Owens, not to mention the matches those two could put on at a big event like WrestleMania? CM Punk was the hottest act in professional wrestling, only in par with Daniel Bryan when he walked out of the WWE. Even with CM Punk being gone for over four years, we still hear the fans chant his name. (Mostly in Chicago)

One has to wonder what might have been had he decided to stick around. Vince McMahon has gone on record stating he is be open to work with Punk again, but that is highly unlikely. The Straight Edge Superstar has repeatedly stated he will never return to WWE. But you know the saying in WWE. Never say Never.

Since CM Punk’s departure, he signed on with the UFC. His first match was a two-minute 14-second beating at the hands of Mickey Gall and a losing effort match with Mike Jackson. Could this force him back to the wrestling business? Will he ever return to WWE? Will he ever return to wrestling? This is always a hot topic and CM Punk continues to answer that question with a big no. The question on my mind is, where would he be if he had not walked out of the company?

Match against Triple H at WrestleMania 30 where the winner would be added to the WWE Championship match.

CM Punk owned Triple H on countless occasions, including the infamous pipe bomb promo in which Punk referred to Triple H as Vince McMahon’s doofus son-in-law. Punk would take shots at Triple H on marrying his way into the business and constantly got on the Game’s nerves. This feud had all it takes to go for a while.

Daniel Bryan and CM Punk formed an alliance to take on the Wyatt family in November 2013. They defeated Harper and Rowan at Survivor Series in a tag team match. The next night on Raw, Punk would try to save Bryan from being taken hostage by the Wyatt family but was destroyed by the Shield.

This led to CM Punk accusing the authority of orchestrating the attack, which resulted in an unfinished feud with the director of operations, Kane. The last we saw of this feud was Kane eliminating Punk from the Royal Rumble. If Punk was still in the WWE at the time, we would have witnessed CM Punk vs. Triple H at WrestleMania 30 instead of Triple H facing Daniel Bryan.

One of the less favorable outcomes of CM Punk remaining with WWE is the likelihood that Daniel Bryan’s WWE Championship victory at WrestleMania 30, would surely never have happened. The organization, prior to Punk’s departure, had planned to book him, not Bryan in a match with Triple H on the show. Bryan defeated Triple H at WrestleMania to insert himself in the WWE Championship match versus Batista and Randy Orton which he also won.

Had Punk stayed, Bryan would have remained firmly in the mid-card level. Could WWE have decided to put Punk in the same position where he could have had an opportunity to wrestle for the title? What is abundantly clear is that WWE fans would have rejected a singles match between Orton and Batista. WWE would have to insert someone else into it. Could a Punk-Triple H encounter have served the same purpose as the Bryan-Triple H match? It is eminently possible. Punk is the only other wrestler whom fans would have accepted in that spot other than Bryan.

CM Punk and The Shield vs Evolution and Kane.

When The Shield debuted in 2012, they assisted Punk to retain the WWE Championship against Ryback and John Cena. The group yet again tried to help Punk retain the gold by attacking the Rock at the Royal Rumble which resulted in Punk pinning the Rock. But the match was restarted by Vince McMahon and Punk ended up losing the title. That would be the last time we saw CM Punk and The Shield on the same page.

CM Punk would have had the opportunity to work with the faction that he came up with if he had not left the WWE. Punk aligning himself with the Shield to level the odds against Evolution and Kane. This is a feud that would have been best for business.

Feud with Seth Rollins for the WWE Championship.

Seth Rollins during his heel days was considered being the second coming of CM Punk. Rollins possessed similar verbal and in-ring ability as of CM Punk. Both were best at their game irrespective of being portrayed as either a heel or baby-face. After Rollins cashed in Money in the Bank to become the WWE World Heavyweight Champion at WrestleMania 31, he went on to defend the title against Randy Orton, John Cena, and Brock Lesnar.

A WWE Championship match between CM Punk and Seth Rollins would have become a reality if Punk did not quit. It would have been intriguing to see two superstars with such similar abilities collide in a one-on-one match. CM Punk would have helped Rollins reach even greater heights, even though the King Slayer does not need the help.

Match against Kevin Owens for the Intercontinental Championship at WrestleMania 32.

CM Punk and Kevin Owens go way back during their time together in Ring of Honor. Owens still talks about the infamous t-shirt incident between him and Punk. It is a shame that we never got to see Punk and Owens collide in a WWE ring. But this could have been a reality if Punk were around during WrestleMania 32.

A Move to SmackDown and a feud with AJ Styles.

CM Punk could have played a major part during the 2016 WWE brand split. Punk would have been a great addition to SmackDown and we could have seen Punk go back to the blue brand. The SmackDown roster was stacked with talent, like John Cena, Randy Orton and The Miz. The most ideal opponent for CM Punk would be AJ Styles.

CM Punk’s chosen career post-WWE was a martial arts career in UFC. However, his initial MMA fight versus Mickey Gall was a disaster. Punk was completely overwhelmed by the younger and faster Gall. Punk submitted just over two minutes into the fight. The former legendary WWE Champion was no match for a legitimate fighter. To most people’s surprise, UFC President, Dana White gave Punk another chance.

Although he fared better, lasting the full time limit with the equally inexperienced Mike Jackson. In a sense, this performance exposed Punk’s weaknesses far more. Fifteen minutes of watching Punk fight showcased that he lacked the stamina, punching power and any skill on the ground in offence or defense. If Punk had never left WWE, this embarrassing UFC episode would not have occurred.

There would have been an excellent chance that CM Punk would have added to his World Championship tally as soon as WrestleMania 30. Men like Bray Wyatt, Jinder Mahal, Kevin Owens, Finn Balor and Dean Ambrose have all reigned as Champion in the years following Punk’s departure. It seems unlikely that all of these men would have been World Champion had Punk remained with the company. Punk could have been inserted into any of these title feuds.

Punk’s presence in the WWE would also have saved its audience from witnessing epic Brock Lesnar title reigns with minimal defenses. Punk’s five major title reigns would have greatly expanded to at least 10, without question.

In Conclusion.
It brings mixed emotions when I fantasize about the matches and story-lines Punk could have been a part of if he had not walked out of the WWE. However, you look at it, one thing is for certain; had Punk not left the WWE, the company itself would have benefited enormously from retaining a bonafide superstar on its roster and saved itself from the many disappointments they have endured attempting to insert ill suiting superstars into the main event.

Without doubt, Punk’s already legendary career would have been further enhanced had he not left the promotion. The additional title reigns and a for sure Wrestlemania main event would have pushed Punk farther up the ladder. The only thing we can do now is to hope that Punk would at some point in the future, bury the hatchet with Vince McMahon and Triple H and return to the WWE once again. Not to be the Superstar he was or could have been, but to give us a little more entertainment. Or as Punk stated, was he always just meant to be another spoke in the wheel?

I’d love to see your comments below and will respond and interact. I hope you all have a great Christmas and New Year.