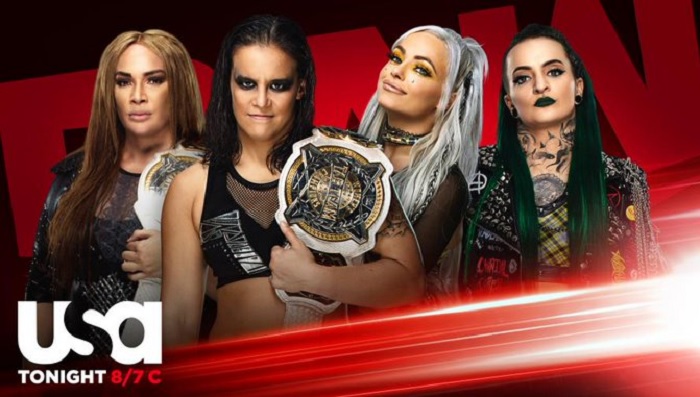 The WWE Women’s Tag-Team Championship contest for tonight’s edition of Monday Night Raw has been announced.

On Monday afternoon, WWE announced via their official website and on their social media platforms that Women’s Tag-Team Champions Shayna Baszler and Nia Jax will be defending their titles against The Riott Squad — Ruby Riott and Liv Morgan — tonight.

The announcement comes following comments from Jax earlier today, where she revealed that she and Baszler would be on this week’s red brand show, noting that she is on hand with “a fresh weave” for Monday Night Raw.

Also on tap for tonight’s show is WWE Champion Drew McIntyre and Raw Tag-Team Champions The Street Profits taking on the trio of Randy Orton, Dolph Ziggler and Robert Roode in a featured six-man tag-team match, as well as Kevin Owens inviting “The Fiend” Bray Wyatt to a special edition of “The KO Show” after being attacked on last week’s post-WWE Clash Of Champions edition of Friday Night SmackDown.