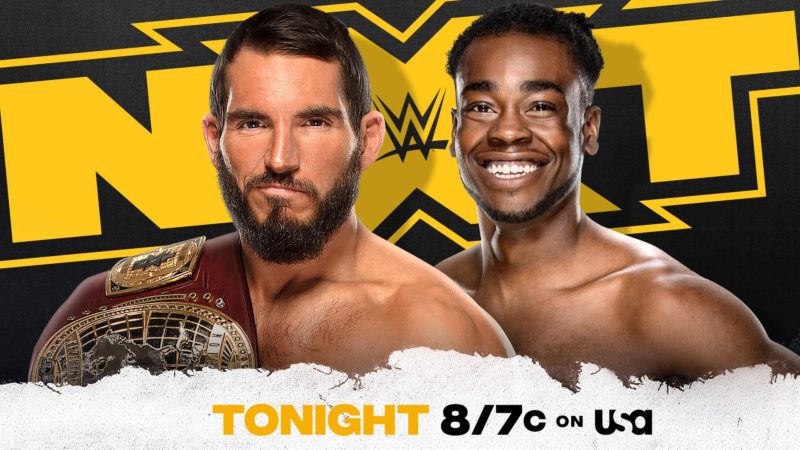 This show kicks off with the match between the incredibly athletic Swerve and the massive Bronson Reed. Reed’s size is his advantage as he easily manhandles Swerve. He is dominant, but Swerve is able to somehow throw off the full weight of Reed on him. Reed eventually gets the win with a Tsunami, ending his year strong.

Breakout Star of the Year

The award is given to Shotzi Blackheart out of a packed field. She cuts a promo from her backyard in Orlando.

This match is a bit of a preview for the Dusty Classic which returns in 2 weeks. GYV have the majority of control in this match, using their technical prowess to battle the athleticism of Breezango. After a brutal match it’s GYV that get the pin over the former NXT Tag Team Champions.

Afterward Ever Rise come out to confront GYV, but when they respond they quickly escape.

Tag Team of the Year

Undisputed Era is awarded this honor. Afterward they announce that Adam Cole and Roderick Strong are representing UE in the Dusty Classic.

Boa and Xia Li are now working on their martial arts witout pain. They are dressed in white bowing to their sensei, but then the cloaked figure approaches them and marks them from forehead to nose while breathing smoke to them. she opens curtains, revealing a great light and steps into it followed by the two. It’s revealed Next Week we’ll find out more.

Mercedes Martinez is dominant, though Valentina tries to wrap herself around the veteran. Upset at the disrespect, Mercedez starts to throw Valentina around the ring, berating her as she does. Martinez gets the win shortly afterward with an Air Raid Crash.

Female Competitor of the Year

This award is given to Io Shirai. After the announcement, she delivers a home video promo thanking the fans.

Male Competitor of the Year

After the women, the men get their turn with the award going to Adam Cole. He thanks the NXT Universe for being able to achieve the heights he has.

They play with the fact that Roderick Strong betrayed Pete Dunne when they were Tag Team Champions. Interesting that now the roles are reversed as far as heel/baby. The match continues to the outside, with Roddy sending Dunne over the barricade.

Dunne gets Strong back in the ring and after being thwarted multiple times, he begins a meticulous attack. The offense is even back and forth, though a backbreaker onto Dunne while in a triangle choke looks brutal.

Dunne, however, overcomes Roderick Strong to land a Bitter End in order to get the pin and win.

Match of the Year

The award goes to Finn Balor vs Kyle O’Reilly for the NXT Championship at Takeover 31. On a personal note, this was my Match of the Year in NXT. Finn shows up to pick up his award but says he doesn’t need it, but takes Kyle’s in order to give it to him himself.

Finn is in the ring talking about their previous match and does declare that he was impressed by O’Reilly and that O’Reilly absolutely deserves the praise given. He left the award for Match of the Year and tells Kyle O’Reilly that he doesn’t need to be reminded since he has 3 plates in his jaw to remind him.  Kyle gives another amazing emotional promo about what being NXT Champion would mean to him and what the belt itself symbolizes.

Scarlett and Karrion Kross step onto the stage and let them know that no matter who leaves with the belt, it truly belongs to them. We discover Damien Priest standing behind Kross as the camera zooms out, and the two battle. The fight moves into the equipment area with both ending up through tables.

A pretty incredible package plays building up the former friendship of Rhea O’Reilly and Raquel Gonzalez prior to their confrontation at New Year’s Evil.

Santos Escobar starts to talk about the change that needs to take place with Lucha Libre in NXT. A surprise appearance by Lucha House Party escalates to a match between the two teams as an attack starts. There is a ton of action between both teams with the best work we’ve seen from Lucha House Party in a long time. Gran Metalik picks up the win with a flying elbow.

It's a high-flying LUCHA HOUSE PARTY on #WWENXT! pic.twitter.com/jxUApX3PZf

Future Star of the Year

This Award goes to Austin Theory, who is carrying his Gargano Whey. He’s also told to share with Indi Hartwell, and tells Johnny he’ll break the Curse. Gargano is upset and throws his whey, which breaks a mirror and leaves him paranoid due to superstition prior to the match.

Overall Competitor of the Year

Io Shirai wins this, making her a double-winner with her earlier win in the night.

Leon Ruff again uses his quickness to stay out of touch of Johnny Gargano. Gargano finally gets a moment to breathe when he pushes Ruff over the top rope. Gargano starts throwing around ruff outside of the ring, sending him into barriers and ring steps.

Once back in the ring he tries to pick apart Leon Ruff, continuously attacking him. Ruff makes his own opportunity delivering a flatliner on the outside, but isn’t able to finish the job with a frog splash. Gargano lands One Final Beat after cutting off Leon Ruff on the Top Rope and breaks his curse. Johnny Gargano is still the NXT North American Champion.

As the show goes off the air the lights flicker, and Dexter Loomis is shown to announce Gran Metalik will face Santos Escobar at New Year’s Evil along with the rest of the card.