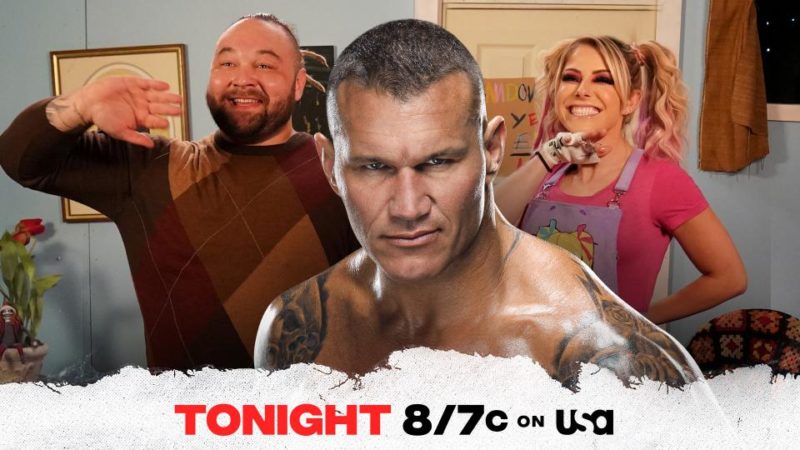 Randy Orton opens the show addressing the contrast between himself and The Fiend. As he continues, Bray pops up from the Funhouse. Since Randy was so mean to Alexa last week, Bray decides to play “Let’s Get Randy.”

Getting annoyed by the shenanigans, Randy challenges Bray to a match tonight since he’s facing The Fiend at TLC.

Lana accompanies Asuka while Nia accompanies Shayna.. The two duos will be facing off for the Woment’s Tag Team Titles at TLC. The chemistry between Asuka and Shayna is great, both women being quite proficient grapplers. When Lana attempts to seated Senton Nia on the outside, she catches the Ravishing Russian, but Lana manages to headscissor Nia into the announcer table. While Shayna is distracted by the chaos, Asuka gets the roll-up pin on Shayna for the win.

This is a Mixed Tag Team Match and Mustafa Ali is on the outside of the ring guiding his minions. Dana Brooke quickly pins Reckoning once she’s tagged in, leaving Mustafa Ali enraged at his Retribution members.

Miz recounts his busy week and calls out AJ to talk about his upcoming match with Drew McIntyre. AJ mentions that this is his first time going against Drew, but Miz and Morrison go into terrible Sheamus and Drew McIntyre impressions.

This brings out Sheamus, who is shortly followed by Drew after some banter with the heels. When AJ tries to say the match is in fact 4-on-2, Sheamus and McIntyre clear the ring before Drew throws the Money in the Bank Briefcase out of the ring to the entrance.

Commentary mentions that this is one of the earliest feuds in WWECW which is a nice throwback. This is an incredibly athletic match though Benjamin targets Kofi’s tweaked left leg. After a near count-out Benjamin walks into a Trouble In Paradise for the loss.

Cedric Alexander jumps on the mic and challenges Kofi to an immediate match so he can wipe the floor with him like he did Woods the week before.

Kofi works through his tweaked leg but it does effect his offense as it doesn’t land as solid. Alexander is intense on offense after targeting the leg Cedric scores the pinfall after a Lumbar Check on Kofi.

The story that’s been told is the sudden yet inevitable betrayal of Sheamus, but early on he is laying into the trio without prejudice. He nearly hits Drew when on the outside, but he catches himself before the Duo catch Morrison and toss him making him land on the chair behind the announce desk.

Despite the 2-on-3 disadvantage, Drew and Sheamus seem to be in control most of the early portion of the match. Unfortunately, Sheamus delivers an accidental Brogue Kick to Drew and AJ takes advantage to deliver a phenomenal forearm for the win.

After the match Drew confronts Sheamus backstage with doubt of the kick being accidental. This devolves into a fight broken up by Pat Buck who is then attacked by both and put through a table. This seems to calm the tensions as the two go off for a drink.

Lana is backstage with Asuka who is hyping her up for her match next week against Nia Jax, and though she boosts her spirit, Nia brings it right back down.

Prior to the match Riddle approaches Jeff in Gorilla and proposes they become a tag team “The Hardy Bros.”

Bobby Lashley is able to easily dominate Hardy with pure strength, though MVP starts to cause a distraction. Riddle makes his way to the ring and eliminates MVP, allowing Hardy to get some form of control. The two continue to battle and Hardy comes close to a win with a Whisper in the Wind. Hardy finally succeeds in getting Lashley down, but not for long as Lashley avoids a Swanton to deliver a Spear and lock in the Hurt Lock forcing Hardy to Tap.

Afterward Riddle tries to rescue Hardy when Lashley won’t release the lock, but MVP stops him and as Hardy is thrown into Riddle MVP steals his Bronuts.

Prior to the match, Ramblin’ Rabbit visits Orton to wish him luck. Randy is focused on brutalizing Bray, while Brey focuses on targeted counters to the offense of Orton. As Orton gets ready to deliver the RKO, The lights in the Thunderdome start going out, but he does deliver the RKO and as he goes for the Pin, the lights go out. When they come back up Bray has transformed into The Fiend and puts Randy out with a mandible Claw.