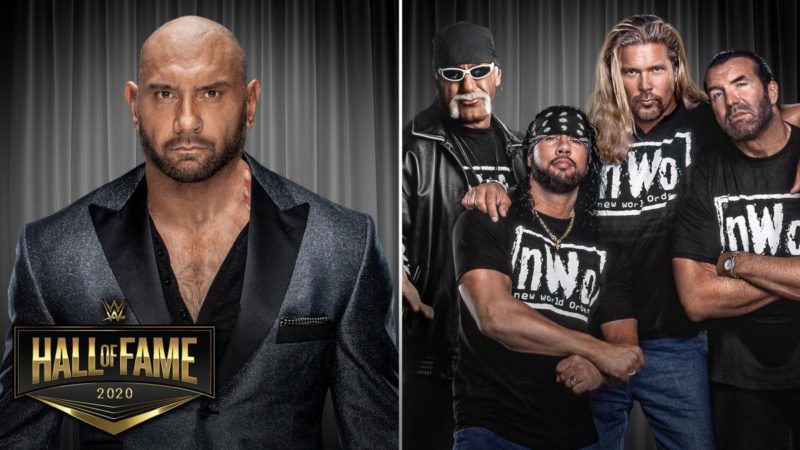 WWE has announced that both Batista and nWo members “Hollywood” Hulk Hogan, Scott Hall, Kevin Nash and Sean Waltman will be inducted into Hall Of Fame next year.

The news of Batista’s induction was broken by people.com and nWo’s induction was confirmed by ESPN. The company later made both these announcements official on their website.

Talking about his upcoming Achievement, the Animal revealed that Vince McMahon personally called him to offer the honor and he said that he doesn’t think it has sunk in yet:

“I don’t think it’s sunk in, and I was thinking about it because I mean, it seems like a long journey, but it also feels like yesterday when I started my career. And it also feels … because I’m still working so much, it doesn’t feel like an end of a journey.”

On the other hand, Hulk Hogan recalled how they were the guys who were trying to take Vince McMahon’s spot years ago and now they are being inducted into the Hall Of Fame:

“You’ve got four guys that were basically going at Vince as a shoot, pushing hard to actually try to take over,” Hogan told ESPN. “Not put him out of business but basically take his spot and be the No. 1 company. All of a sudden, you’re inducting four guys in the Hall of Fame that 20 years ago were trying to stab you in the back. It’s like Vince says: In the WWE, never say never.”

The 2020 WWE Hall of Fame Induction Ceremony will take place on Thursday, April 2 at Amalie Arena in Tampa Bay, Florida as part of WrestleMania 36 Week.