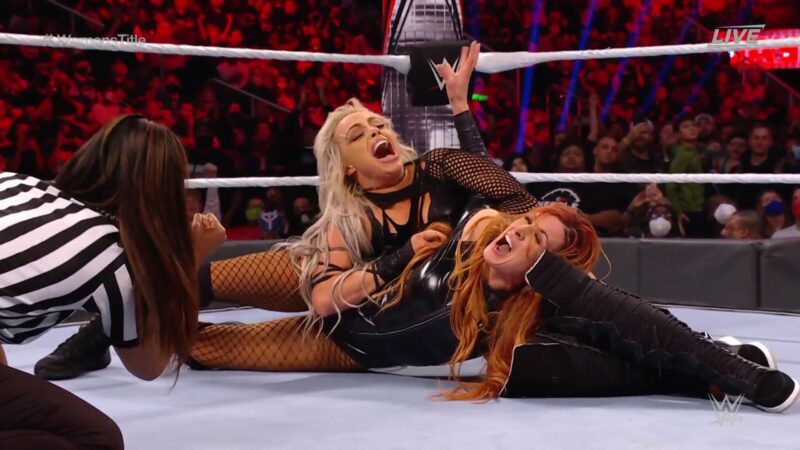 Becky Lynch appeared to botch the finish during her win against Liv Morgan at WWE Day 1, as she was unable to put her feet on the rope to cheat to win, so she ended up going over clean.

Looks like a botch there as Becky Lynch was supposed to get her feet on the rope for the count. Probably messed the angle to a future return match.

WWE star Liv Morgan recently sent out a message hours prior to WWE Day 1, where she was set to challenge Becky Lynch at for the RAW Women’s Championship. Taking to Twitter, Morgan referenced AEW star Ruby Soho, formerly known as Ruby Riott in WWE. Morgan and Soho are quite close in real-life and have developed a wholesome friendship, as well. Liv Morgan was also spotted with a top AEW star.

In one of her most recent tweets, Liv claimed there will be a “Riott” when she wins the RAW Women’s Championship at WWE Day 1.

When we win today, we Riott 👅😉

During their time together in WWE, Liv Morgan and Ruby Soho were part of The Riott Squad. The faction also consisted of Sarah Logan and the three superstars developed quite a close relationship, both on and off-screen. The former Ruby Riott was released by WWE. Her departure had ended the pairing of her and Morgan, as The Riott Squad also disbanded for the second and final time.

Morgan and Lynch have been feuding for a few weeks now, and it all began when the challenger won a Fatal 5-Way Match to initially become the #1 contender. Morgan had already previously challenged Lynch for the title. However, she was unable to dethrone Big Time Becks, who secured a win with a little trick.

Morgan is not the only one to have to chance to win a title. Ruby Soho, who signed with AEW, now has the opportunity to become the first-ever AEW TBS Champion. Soho will compete in the tournament final against Jade Cargill on the January 5 episode of Dynamite.