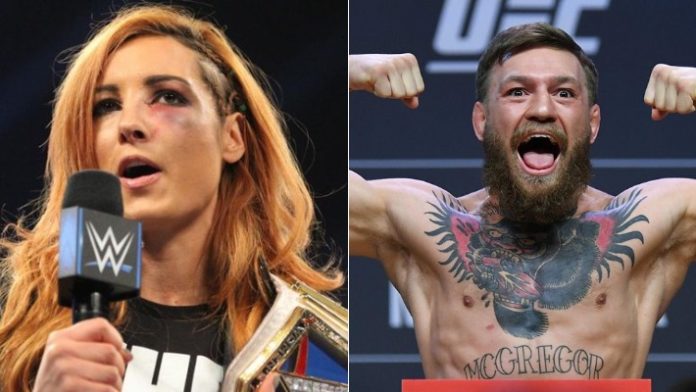 Becky Lynch and Connor McGregor’s similarities do not end at both being Irish. They both have a temper and they don’t care about their haters.

On Twitter, Beck would respond to an article saying that she was channeling her inner McGregor and The Notorious are bonded as Irish brother and sister. She’d then say that she would still break his arm and their Irish bond in three seconds given the chance.

Connor would respond to her tweet, saying “Call me when you need Proper back up”, implying he would offer support to her.

The Man channels no one. @TheNotoriousMMA & me are bonded as Irish brother & sister. But if I ever got within 2 miles of him I’d break that bond, and his arm, in three short seconds. 😂 I’d be too tempting; he’d completely understand too. Proper12 after.
https://t.co/GNAytrkJ7n

Call me when you need Proper back up.

Afterwards, Becky would drop a hint at a potential Connor McGregor appearance – perhaps for Wrestlemania. WWE has been trying to get Connor to appear for a while now.

Cheers, Conor. I’m carrying two divisions at the moment, but you know exactly how that is. I hear New York is nice in the spring, though. 🇮🇪 https://t.co/51VSVCCG28

While it is unsure whether he will actually make an appearance, you never know what can happen. Especially given how WWE has many months at hand to plan things out. We might be seeing Connor one way or the other.

Becky Lynch’s popularity keeps on skyrocketing. It might even be the reason for The Notorious One to have a more permanent spot in professional wrestling.