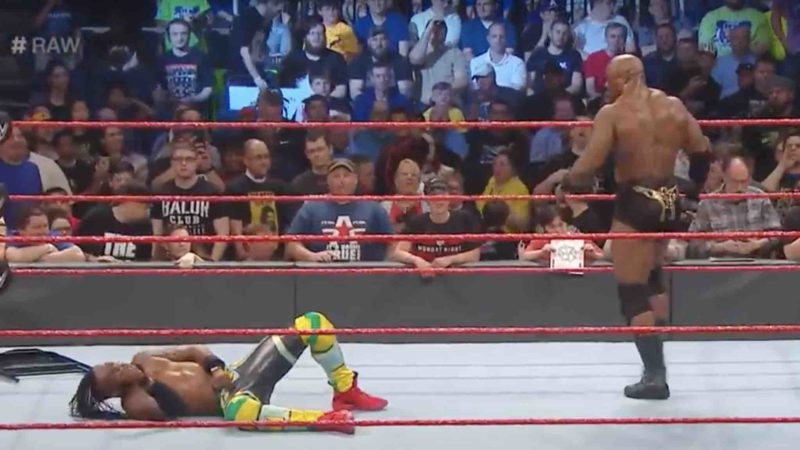 Current WWE Champion Bobby Lashley has praised Kofi Kingston for his WWE title reign, which was buried by Brock Lesnar on Smackdown in 2019. Vince McMahon ‘argued’ with Bobby Lashley backstage.

Kofi had written, “You love to see it… Congrats @bobbylashley! 🙌🏾” Lashley responded, “Thank you for leading the way brotha.”

Lashley made his return to WWE back in 2018 and instantly became a mainstay on regular WWE television programming. Apollo Crews was called up to the main roster in 2016 but was floundering around for years until he finally had a program with Lashley.

Bobby Lashley spoke on WWE After The Bell, where he revealed how Crews reached out to him before he made his WWE return in 2018. This included a match against Roman Reigns.

“Before I even came back, Apollo sent me a DM — I didn’t even know Apollo — and was like, ‘I have a couple of questions to ask you. Did you ever get frustrated when you were here?’ I was like, ‘You’re talking to a man that’s not in and wants to get in. You’re in the greatest place you can be and you’re an amazing talent, that can’t be denied. Just stay there. Maybe it’s not your time right now.

Eat catering, have a good time, whenever you have an opportunity, do the best you can and you won’t be denied.’ It takes time, sometimes. When I came back, I was like, ‘You can have me beat Roman, go after Brock, and do main event matches or you can make me suffer and pay some dues. I don’t mind either.’ That’s what I told [Apollo], ‘Don’t mind it. Anytime you have the opportunity to get in the ring, just do it and when you do it, they’ll find a place for you. Keep bugging them. Tell them you’ll do this and that. Keep throwing things at them. Maybe, sooner or later, something will stick.

The greatest thing you have going for you is how talented you are and how much respect everyone has for you. That won’t be denied. You’ll eventually be in a big position. Stick in there.’ When I got in and had the opportunity to work with him, I was like, ‘Apollo is a cool dude,'”

Apollo Crews currently has a career resurgence in his feud with Intercontinental Champion Big E on Friday Night Smackdown.