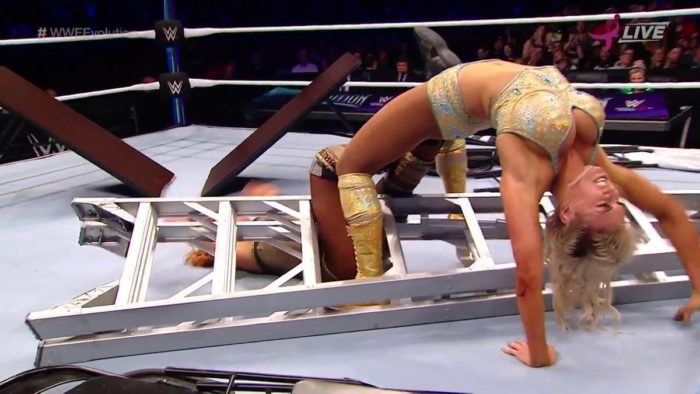 Charlotte Flair has been blessed to be in some of the most historic moments in the Women’s Revolution. Having been part of the first ever Women’s Hell In A Cell match, Money In The Bank ladder match and most recently the Last Woman Standing match at WWE Evolution.

The brutal bout between Becky Lynch and Charlotte Flair was well received by fans and critics alike and despite the defeat, the former Women’s Champion claimed that it was her best performance so far in a chat with SportBible. Flair said:

“It was a culmination of learning, us being best friends and it being the all-women’s pay-per-view. It’s a chance for all the women to show what they have and say, ‘No, I’m the best!’ – it just raises the bar. That’s why I like having two brands; Smackdown wants to be better than RAW, RAW wants to be better than Smackdown – it creates competition and you have to have competition. I think [the] Last Woman Standing [match] has been my best performance so far.”

Charlotte also felt that despite the match being good, there is still a lot of room for improvement for her to evolve as a wrestler. Flair added:

“Well, I watched it back and I was like, ‘I should’ve done this differently!’ – I never want to walk away and be like, ‘This was the best ever‘ because you can always do something better, but I just know Becky and I went into Evolution wanting to steal the show and wanting to have a match that would stand the test of time and I think we did that because of how much emotion was put into it. Everyone can relate to a best friend story whether you’re on Becky’s side or whether you’re on my side, you understand it and I think people genuinely saw how close we are or were throughout the years.”

To conclude, Flair was asked to compare her Hell In A Cell bout with the Last Woman Standing match. She claimed that while she was nervous about the recent bout due to the absence of pinfall count, she would rather redo the Hell In A Cell match again. Flair stated:

“I was actually nervous about the Last Woman Standing match because not having a count or a pinfall, I’ve never had one of these. At least with the Falls Count Anywhere you’re still getting a count! I think the Last Women’s Standing match has to be the most challenging but I wish I could go back and redo my Hell in a Cell match because I wish I was the talent back then that I am now and I would have done so many things different and better.”