The undefeated boxing star Floyd Mayweather and the YouTuber-turned-pro-boxer Logan Paul had squared off against each other in an exhibition boxing match on June 6 at the Hard Rock Stadium in Miami Gardens, Florida. The match received a lot of hype from the fans. As it turns out, Mayweather owes The Maverick some money. Recently in a picture Logan Paul looked bloated.

For a lot of fans, the boxing match was full of action as both Paul and Mayweather went the distance in the match, which was something many fans did not expect at all. The match was also panned by many for not being a proper boxing match.

Logan Paul had a great performance in his boxing match as he proved that he could hang with the best of them in the professional boxing world. Both Paul and Mayweather walked out with millions of dollars.

Mayweather posted a picture of himself in Russia and in response to this, Logan Paul took to his Instagram stories and demanded money back from Mayweather.

Pay me my money you f*** corny weasel of human”

You can check out the picture below: 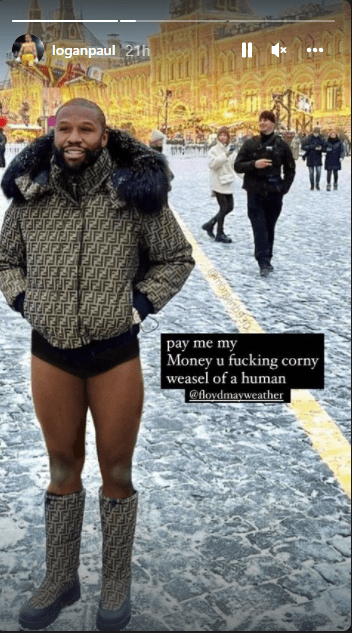 Logan Paul had made it clear that he wants to square off against Anderson Silva in the future and Silva himself expressed interest in a boxing match as well. Even Paul previously claimed he could’ve knocked out Mayweather had the boxing match been 12 rounds. The fight went the full eight-round distance, and no winner was announced. We will have to wait and see what is next for Logan Paul in the world of pro-boxing.