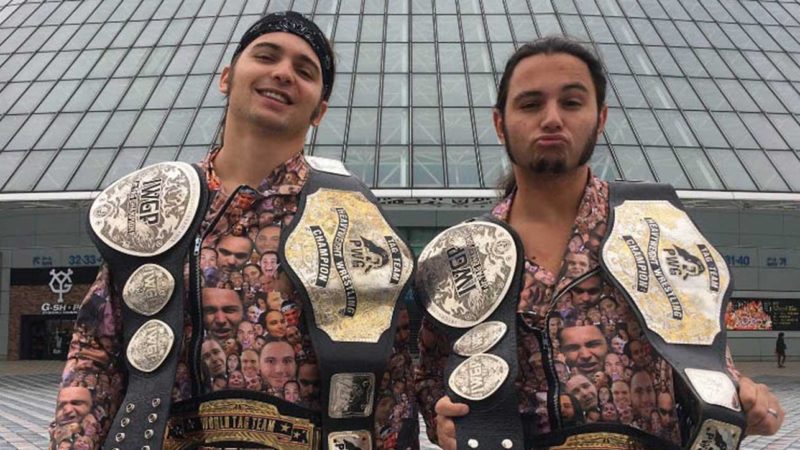 There hasn’t been a team like The Young Bucks in the history of pro wrestling. True, there have been plenty of babyface tag teams in the past that sold a lot of merchandise but Nick and Matt Jackson seem to be in a league of their own.

The Jackson brothers are taking their talent to Montreal on August 5th and you can watch “IWS Scarred 4 Life” go down for free along with the entire action packed show. The Young Bucks are challenging for Le Tabarnak De Team’s IWS Tag Team Championships so who knows if we’ll be seeing the Jacksons add to their already unbelievable collection of championship titles.

Hosting and commentary duties will be on Brian The Guppie for this event and we can’t wait to watch it for free on International Wrestling Syndicate’s Facebook page.

You can check out the entire press release for the event below:


The high-flying, polarizing masters of the superkick party, the YOUNG BUCKS are coming to Montreal to face Quebec’s top tag team LE TABARNAK DE TEAM, and TDT’s IWS Tag Team Championships are on the line! Will Matt and Nick Jackson add another championship to their collection? Can TDT defeat one of the most ELITE tag teams in the world? Find out August 5th!

‘THE PROFESSIONAL’ SCOTT PARKER is challenged by former champ BLACK DYNAMITE for the IWS CHAMPIONSHIP. Tensions between these two top contenders have reached a boiling point over the last few months. Can Black Dynamite win back the IWS Championship he was screwed out of? Or will The Golden Professional get the job done once more?

“SPEEDBALL” MIKE BAILEY is back, and has been hired by IWS Owner PCP Manny to take out “DIRTY” BUXX BELMAR! Two of Montreal’s top talents, and former friends, collide as bitter enemies!