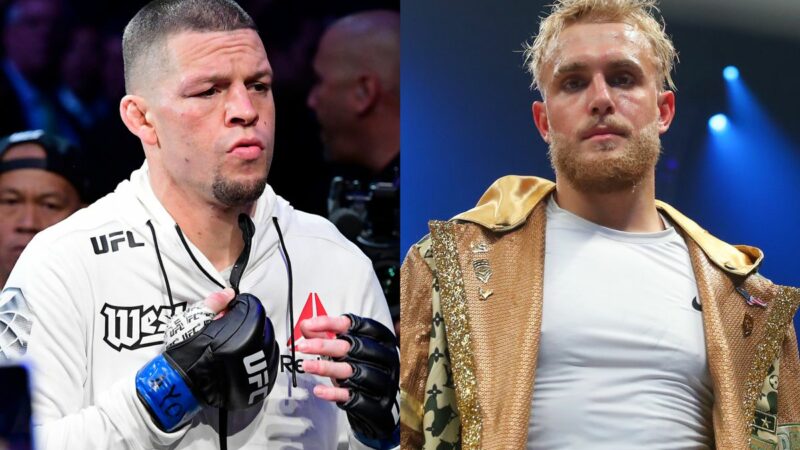 Jake Paul recently told ‘Below the Belt’ that he negotiated with Nate Diaz for a boxing match, but that the fight would be too easy. In the interview taped prior to UFC 263, he correctly predicted Diaz would lose, and that he is ‘washed up.’ Wrestling-Edge transcribed his comments.

“We were thinking about Usman, there were Nate Diaz talks happening.” He added, “Usman is a really difficult fight, Nate Diaz, an easy fight.”

He added, “Bro, [Leon] Edwards is who he is fighting? Leon Edwards is gonna dust Nate. He’s washed up.”

The YouTuber turned professional boxer, Jake Paul is set to square off against the former UFC Welterweight Champion Tyron Woodley on August 28 in a boxing match. Currently the odds are in favor of Jake Paul even if Tyron Woodley is definitely the biggest opponent for Jake Paul so far. Jake Paul might be faking an injury for his upcoming boxing match against Tyron Woodley.

Former UFC champion Vitor Belfort recently spoke to MMA Fighting, where he talked about the increase in crossover boxing matches between boxers and MMA fighters. Vitor Belfort also revealed that he is open to facing off against both Logan Paul and Jake Paul on the same night.

“It’s pretty exciting,” Belfort told MMA Fighting. “I’m so pumped, especially doing the crossover, literally seeing who has the best hands if they can box together, the MMA guy or the boxer? My debut is going to be against a YouTuber that really is not picking an easy opponent like the other two brothers [Jake Paul and Logan Paul] are. This is guy literally fighting one of the fiercest guys in the industry, not picking up a wrestler [in Ben Askren] who doesn’t know how to throw a punch. Picking up a guy [in Tyron Woodley] who can now just throw one killer punch.

“The Triller guys said ‘Vitor, when we brought your name up, they are shaken up oh no not him!’ and they’re choosing these guys, the wrestlers.