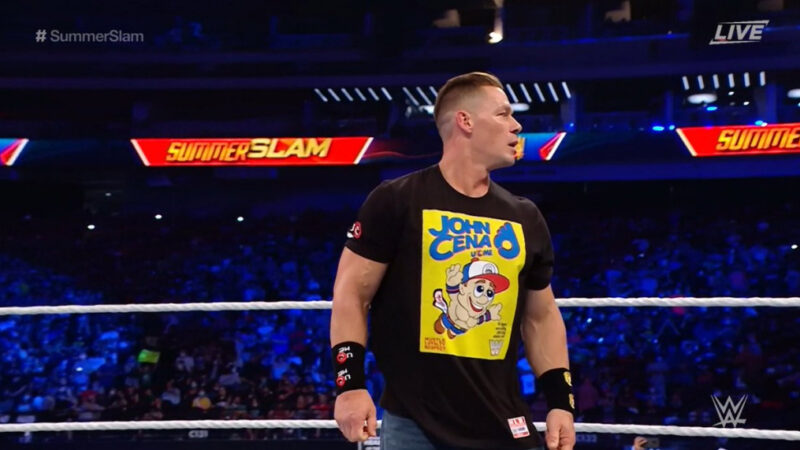 John Cena made his highly-anticipated return on the latest edition of Monday Night RAW to celebrate 20th Anniversary of his debut. Fans had been speculating that the reigning WWE United States Champion Theory would be Cena’s opponent at SummerSlam.  Meanwhile, Lashley is scheduled to challenge Theory at Saturday’s Money in the Bank premium live event with the United States Championship on the line. It seems Cena’s return has left ‘The All Mighty’ at a tough spot.

John Cena had an interaction with Theory

Even a brief backstage interaction between Cena and Theory was enough to thrill the crowd, who has been waiting for the two to cross paths for months. That leaves Bobby Lashley in an ‘lame-duck’ position.

On the latest Wrestling Observer Radio, Dave Meltzer called Lashley’s position a “lame-duck situation.” WWE might have to get creative with how they handle the match. Having Lashley beat Theory could weaken his position heading into a feud with John Cena:

“Lashley’s in a lame-duck situation because you know that like, he can’t like destroy Theory like you would think the way that they’ve been booked previously, that Lashley would tear him up and probably that’s not going to happen because they have to protect Theory to a degree. Maybe, you know. The thing is, Lashley could still win the title, though, because it really doesn’t benefit John Cena to be in a US Championship match.

Or, you could do something where Cena causes Theory to lose if he’s going to show up on [Saturday] to give them something special or something. The thing is, you don’t want to do the big angle right now, because then why even do the Lashley match, because it becomes the cold match.”

It is believed that John Cena might be involved during the match between Theory and Bobby Lashley at MITB. We will see what WWE has in store for them