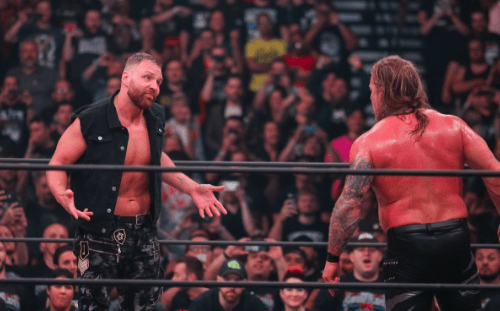 The landscape of professional wrestling has just been changed. After Chris Jericho defeated Kenny Omega to earn a title opportunity against Hangman Page, he cut a heel promo on everyone but little did he know that he was in for a vicious surprise.

Jon Moxley, the former WWE Grand Slam Champion Dean Ambrose, walked out to the ring from the audience. The crowd went absolutely nuts as Moxley entered the ring and came face to face with old rival Chris Jericho.

Soon enough, Moxley hit his finish (formerly known as the Dirty Deeds) on Jericho and laid him out in the ring. Then, an official was sent to calm things down but the Mox hit one on him as well.

A broken and bloodied Kenny Omega was next on Moxley’s radar but instead of falling a victim to Moxley’s assault, the Cleaner took the fight to him in an old fashioned bar fight. However, that wasn’t enough to take down a liberated Jon Moxley who took Omega right atop the giant stacks of poker chips and hit a Dirty Deeds on him.

However, the former Lunatic Fringe wasn’t done yet as he picked up Omega on his shoulders and threw him right over the chips and on the table below.

He is here! @JonMoxley #AEWDoN pic.twitter.com/n2ajcpkGjI