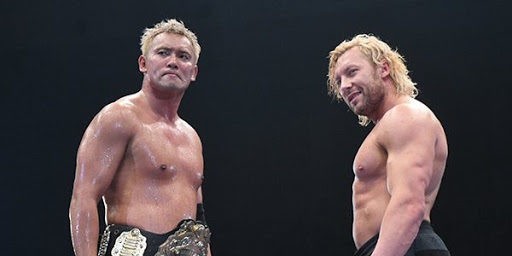 Ric Flair is considered one of the greatest professional wrestlers to have ever stepped foot inside a wrestling ring and being compared to him is an accolade in itself.

Current AEW star Kenny Omega made one such comparison during his recent interview with Bleacher Report, naming his longtime opponent.

Omega was talking about none other than his longtime rival and NJPW star Kazuchika Okada and he called the former IWGP World Champion the modern-day Ric Flair:

“A lot of wrestling historians and purists will go to bat and say that [Ric] Flair was the greatest of all time because he was so successful for a period of years,” Omega says. “The same goes for [Kazuchika] Okada, who’s almost the modern-day Ric Flair. They have a very patterned main event style, but it’s very successful. They bring out the best in almost every opponent.

Apart from this, Kenny Omega talked about his start in NJPW, being a foreign wrestler in Japan and wrestling opponents like Kota Ibushi in the country.