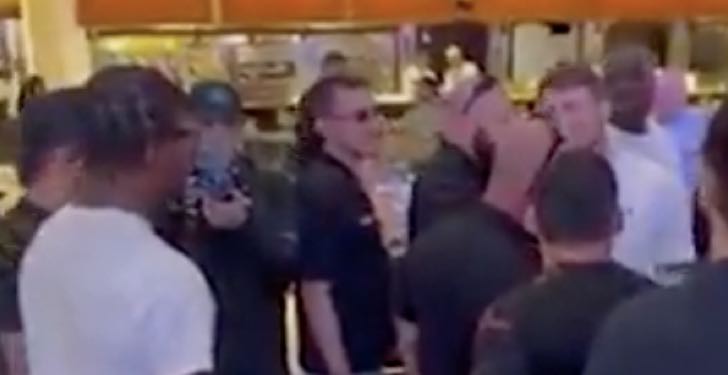 UFC President Dana White decided to call off the UFC 279 press conference for “everybody’s safety” on Thursday at MGM Grand. It was alleged that a backstage altercation between multiple fighters caused the cancelation. According to White, the melee involved Kevin Holland, Khamzat Chimaev, Nate Diaz, and one other unnamed fighter. A video clip has also surfaced where Kevin Holland and Darren Till traded words following the altercation.

Dana White kicked off an impromptu media availability Thursday at MGM Grand Garden Arena  moments after the UFC 279 pre-fight news conference was abruptly canceled for “everybody’s safety.” “All hell broke loose,” White told reporters including MMA Junkie after the incident, as he provided more details and insight into the altercations.

“Multiple crazy – I don’t even know what to call it,” White told reporters including MMA Junkie. “However many years, 22 years, however long I’ve been doing this, we’ve never had an incident like today. All hell broke loose out here. I don’t even know how to (say it). We stopped it, but we didn’t do a good job of not letting happen. I just don’t know.

White described the scene as “very physical” with “lots going on” backstage which is why he ultimately decided to call off the press event mid-session. Objects were allegedly thrown.

White said four fighters total were involved and confirmed tweets from MMA reporter Ariel Helwani that Kevin Holland and Khamzat Chimaev were first to engage before a domino effect of exchanges with other fighters.

Holland and Chimaev have had run-ins in the past at the UFC Performance Institute and a fighter hotel, between numerous insults hurled at news conferences and interviews.

You can check out the war of words below, which fans mocked due to Till and Holland just talking crap and not fighting: